"History is all explained by geology"

The title is a quotation by Robert Penn Warren; it is on the frontspiece of a book by Keith Heyer Meldahl entitled Hard Road West; History and Geology along the gold Rush Trail.  Warren's comment is remarkably true, when you think about it, and is also a nice synthesis of the material in this book.

This is not a new book (2007), but I had not heard about it until running across it in an article in the September 2011 Atlantic magazine:


[Bitter Crossing] stands on the shoulders of one of the great works of post-war American historical scholarship, The Plains Across: The Overland Emigrants and the Trans-Mississippi West, 1840–60 (1979), by John D. Unruh Jr. (In his meticulous attention to the impact of topography on the migration, Bagley is also clearly indebted to Keith Heyer Meldahl’s brilliant, superbly written 2007 geological history of the westward journey, Hard Road West, which is among the best books I’ve read in the past five years.)

When I read that comment by Benjamin Schwartz, I knew I had to read the book.  I was not a bit disappointed; it's a superb book.  The author is a professor of geology.  He applies his knowledge of the geology of the western United States to explain why the early pioneers followed the trails they did, why they encountered such a wide variety of obstacles, and how they overcame them (or died trying).  Here are some interesting tidbits:


"Most emigrants walked much of the 2,000 miles from the Missouri River to California."

That sentence totally blew me away.  I suppose I held a traditional view of Ma and Pa riding up front in Conestoga wagons drawn by a team of horses, with the kids and stuff in back.  In fact only the very youngest (or sick or pregnant) rode - the others walked.  The wagons had primitive suspensions, but more importantly walking took part of the load off the team, which typically was comprised not of horses but of oxen, so the pace was as slow as a person could walk anyway.

At the start of the journey, travelers had to cross from the valley of the South Platte River to that of the North Platte. 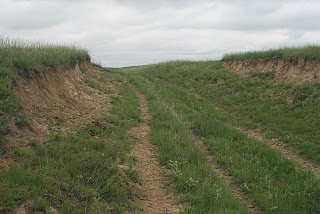 "From Lower California Crossing, they rolled up a gentle rise today called California Hill.  Countless hooves, boots, and wheels followed a single track up this hill, biting deeply into the soft loess soil.  Over the years the traffic excavated a cut some 20 feet wide, 60 feet long, and several feet deep at the center.  It is still there today, in the heart of Nebraska's wheat and cattle country." (p.54)

I would love to walk through that roadcut (photo via TravelPod.)  Now, about the weather...


Of all the Great Plains storms, hailstorms were the worst... Near the South Platte crossing on June 20, 1849, William Swain's party was pounded by hailstones "the size of a walnut to that of a goose egg [original italics]."  The terrified livestock, cut to bleeding and "writhing with the pain inflicted by the strokes of the hail," reared and spun in their traces, upsetting wagons and breaking tongues and wheels...

The settlers encountered landforms totally alien to their experience, some with surprising names:

Chimney Rock looks like an upside-down funnel.  Its lower section consists of soft strata that erode into slopes, while the upper chimney section is composed of sandstone tough enough to stand as a vertical column.

The local Sioux knew what they saw in the towering phallus of Chimney Rock.  They called it Elk Penis.  This was too graphic for most white sensibilities... (p. 59-60)

(pic from Nebraska Tourism).  I learned that the classic phrase "Go West, young man" attributed to newspaper editor Horace Greeley, has to be taken with a grain of salt, because in the 1840s he expressed his scorn for those trying to reach California:


But Greeley's west was the Midwest - the fertile lands of Ohio, Indiana, and Illinois.  Greeley saw little value or purpose in transcontinental emigration. (p. 69)


By the 1830s, Midwestern farmers were producing huge amounts of food - far more than the economy could absorb once it entered the 1837 depression.  Pries for farm goods plummeted.  Wheat sold for far less than the cost of raising it; prices of bacon and lard fell so low that river steamboats burned it for fuel. (p. 72)

Re relationships with Native Americans:


Prior to 1849, most emigrant accounts describe interactions with Indians as friendly.  The natives gave directions and tips about upcoming terrain and sources of water and grass, helped on treacherous river crossings, and engaged in mutually beneficial trading.  In the early years of the westward migration, it seems that native peoples did not see the small number of transient emigrants as a threat.

The gold rush changed that.  Gold fever unleashed a white tsunami across native lands, eroding emigrant-Indian relations and muddying heretofore friendly waters.  Hordes of emigrant cattle stripped grass from river valleys.  Emigrant campfires burned up sparse wood supplies... Disease followed the wagons... Even in the worse years, though, far fewer emigrants died from Indian attacks than died from disease.  In the 20-year period from 1840 to 1860, there are 362 documented instances of emigrant death from Indians.  Estimates of total emigrant deaths during the same period range from 10,000 to 30,000... (p. 75)

Chapter 5 has an excellent explanation of the geologic forces of stream superposition and the Exhumation, and why there are subsummit plateaus.  I can't begin to do the subject justice in this post.  Now re prehistoric western volcanism:


The eruption before that - the 2.1-million-year-old Huckleberry Ridge eruption - was one of the largest volcanic blasts in the known history of the Earth.  It heaved an estimated 585 cubic miles of rock and magma into the stratosphere (Mount St. Helens 6,000 times over), slinging ash west to the Pacific Ocean, east to Minnesota, and south to Mexico.  Spread out evenly, the ash from the Huckleberry Ridge event alone would have buried all of the states west of the Mississippi River two feet deep.  No eruption in recored human history even comes close.  The 1883 eruption of Krakatoa in Indonesia - which decapitated a five-milie-wide island and killed more than 36,000 people - was 100 times smaller than Huckleberry Ridge. (p. 169)


You have to talk a long way uphill to find a respectable tree in the Great Basin.  To most of us, the concept of "tree line" implies an upper limit to forest growth.  It is the elevation (or latitude) up to which trees can grow... But in the Great Basin, as in much of the arid West, the tree line is more often a lower limit.  It is the elevation down to which trees can grow, and below which aridity thwarts the germination of seedlings... (p. 193)

The valley "basins" between mountain ranges obscure how precipitous the mountains really are:


The basins are not empty holes; they are filled in with housands of feet of alluvium - the broken debris of the rising ranges.  Jackson Hole... holds 16,000 vertical feet of silt, sand, and gravel.  No one forgets the spectacle of the Teton Range toweing 6,770 feet over the valley of Jackson Hole... but if you could scoop all 16,000 feet of dirt out of Jackson Hole and stand on the bottom, you would be staring at a four-and-a-half-mile rise from basin to range... (p. 193)

I've previously blogged how chains and rollers were used to hoist wagons over the Rocky Mountains.  Reading this book made me want to travel out west again (haven't been there for decades).  I've already started a list of places to visit, like the aforementioned California Hill, Chimney Rock, Windlass Hill, the Courthouse and Jail rocks, and Deep Rut Hill.  I think maybe I'll just take this book along when (if) I go.  One of its great strengths is that it has a series of topographic maps illustrating the routes and the features under discussion.

If you have any interest at all in geology or the history of the American West, I think you would enjoy this book.