Salient images and video of some "Occupy" events 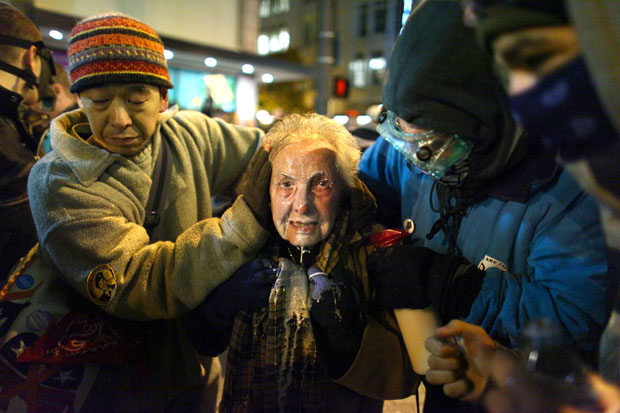 
Rainey was participating in a march that spilled out into the downtown streets Tuesday. When police showed up to control the crowd, she was on the front lines.  The picture, showing Rainey’s face streaked with pepper spray, tears and a milky solution used to combat the spray, has connected with readers and bloggers across the country.

The Fifth Column has some excerpts from her subsequent interview on Countdown:


Rainey said the protesters had decided to leave the intersection, and that police almost certainly knew this because of the protester’s “people’s microphone” method of communication. But before they could leave, police moved in and fired pepper spray at the crowd...

Rainey, who grew up in Nazi Germany, expressed her displeasure with the mainstream American media, who only reported “soft, fluff entertainment” instead of hard-hitting news.

A few days later in Portland: 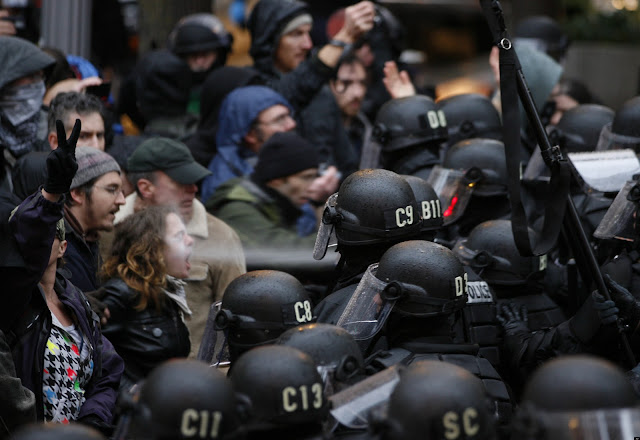 Nichols said a policewoman jabbed her in the ribs with a baton and pressed it against her throat. That made her angry. She yelled at the officer, saying she was being mistreated. That's when another officer shot her with pepper spray. A photo by The Oregonian's Randy L. Rasmussen, which flashed across social media websites, shows Nichols was sprayed from a few feet away.

Given his Washington insider status, it's not at all surprising to hear what his viewpoint is.  What startled me was the harshness of his language (the relevant text is below, but his recitation takes only one minute - listen to the tone of his voice in the video).


"All the Occupy movement starts with the premise that we all owe them everything." They take over a public park they didn't pay for, to go nearby to use bathrooms they didn't pay for, to beg for food from places they don't want to pay for, to obstruct those who are going to work to pay the taxes to sustain the bathrooms and to sustain the park, so they can self-righteously explain they are the paragons of virtue to which we owe everything.  Now that is a pretty good symptom of how much the left has collapsed as a moral system in this country, and why you need to reassert something as simple as saying to them, 'Go get a job right after you take a bath.'"

This is not a matter of simple disagreement; his comments are condescending and vitriolic, a reflection of how much he disrespects -- and I think fears -- non-Tea-Party protestors. 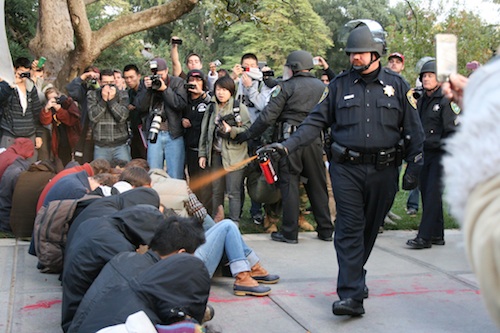 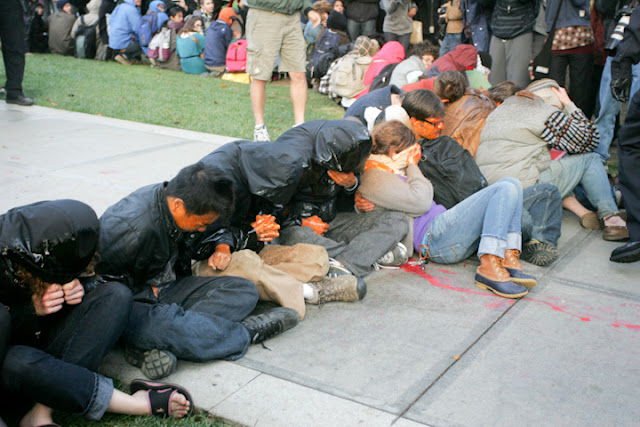 Glenn Greenwald has written a column on the roots of this pepper-spraying.  A UC Davis faculty member has published an open letter to the chancellor of the school, demanding her resignation for allowing this to happen.

But what really sent chills up my spine was encountering this video this morning:

Chancellor Linda P.B. Katehi leaves her administration building late at night and walks to her car.  She is surrounded by what appears to be thousands of protestors.  It looks like she fears for her safety.  But... note the response.  Silence, transmuting the event into a "walk of shame."

It's absolutely chilling to see the discipline displayed here (in contast to the anarchic activities of G-20 riots).  This is how political protest is supposed to be conducted.

Let me close with some comments of my own.  I fully understand that the material in this post is the opposite of the "things you wouldn't know" that I normally try to feature in the blog.  But these events resonate for me on a deeply personal level.  I "came of age" in the late 1960s at a time of seemingly unprecedented social turmoil, and I cautiously began to explore the world of alternative culture and social protest.  In my sophomore year I was chairman of my college's undergraduate Lutheran committee and worked with the campus church's socially progressive pastor H. Paul Santmire to develop a series of programs for students.  I remember one of them involved screening Pier Paolo Pasolini's 1964 The Gospel According to St. Matthew, a controversial movie by an Italian marxist.  We even had to shift the venue because hundreds of people overcrowded the commons room.  We sponsored other lectures about segregation and sexism.

But while I was "dipping my toe" into this world, my little sister was diving in head-first.  Back in Minneapolis she was protesting the emphasis on grades in her high school.  She was a premier student-athlete, but felt strongly that numerical grades and class rankings were antithetical to the goals of education.  She declined her appointment to the Cum Laude Society and asked her classmates to do the same (I think only one did).  The school accepted her behavior with good grace (but didn't change their policies).  After graduation, she headed off to what was then the cauldron of social protest - UC Berkeley - but died tragically out there several years later.  She had a social conscience that was several log powers more powerful than my own; I know if she were alive today, she would be deeply involved with Occupy in one way or another.  All I can do is blog about it.

Interestingly, I have a family member who is currently on the faculty at UC Davis.  Haven't yet heard from him.

Enough of this.  Now back to our regularly scheduled programming.


They didn't show up in riot gear and helmets, they showed up in shirt sleeves with their faces showing. They not only didn't show up with SWAT gear, they showed up with no unusual weapons at all, and what weapons they had all securely holstered. They politely woke everybody up. They politely helped everybody who was willing to remove their property from the park to do so. They then asked, out of the 75 to 100 people down there, how many people were volunteering for being-arrested duty? Given 33 hours to think about it, and 10 hours to sweat it over, only 27 volunteered. As the police already knew, those people's legal advisers had advised them not to even passively resist, so those 27 people lined up to be peacefully arrested, and were escorted away by a handful of cops. The rest were advised to please continue to protest, over there on the sidewalk ... and what happened next was the most absolutely brilliant piece of crowd control policing I have heard of in my entire lifetime.

All of the cops who weren't busy transporting and processing the voluntary arrestees lined up, blocking the stairs down into the plaza. They stood shoulder to shoulder. They kept calm and silent. They positioned the weapons on their belts out of sight. They crossed their hands low in front of them, in exactly the least provocative posture known to man. And they peacefully, silently, respectfully occupied the plaza, using exactly the same non-violent resistance techniques that the protesters themselves had been trained in.