Double rows of eyelashes are usually the result of a mutation at FOXC2 , a gene that influences all kinds of tissue development in embryos. FOXC2 mutations are thought to be responsible for, among other things, lymphedema-distichiasis syndrome , a hereditary disease that can cause disorders of the lymphatic system in addition to double eyelashes... And it turns out that 7 percent of people with lymphedema-distichiasis syndrome also suffer from congenital heart disease. Taylor herself had a history of heart problems...

In her case it may have influenced her acting career:


Roddy McDowall, then 13, recalled: 'On her first day of filming, they took one look at her and said: "Get that girl off the set - she has too much eye make-up on, too much mascara.'

So they rushed her off the set and started rubbing at her eyes with a moist cloth to take the mascara off.  'Guess what? They learned that she had no mascara on. She has a double set of eyelashes...

It can also be acquired and affect single lashes:

Distichiasis can also be acquired following scarring or chemical and physical injury. If there are symptoms, treatment consists of removal of the aberrant eyelashes, usually by cryotherapy (removal under cold or freezing conditions) or electrolysis.

The aberrant eyelash can produce ocular problems if it incurves toward the cornea, as shown in the illustration at right, from Slatter D., Textbook of Small Animal Surgery, Saunders, 2002 (via).

That was the case for a member of our family - Doppelganger, a feral cat we rescued.  His distichiasis did not lead to a career of film stardom, but rather a series of vi$it$ to a veterinary opthalmologi$t.  But he is a sweet kitty, and would like his 15 minutes of fame.  Take a bow, Dop... 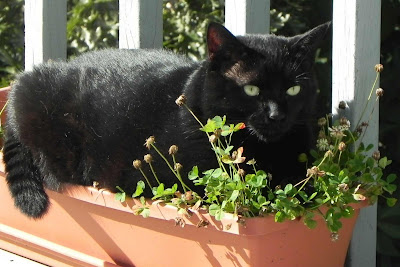 Finally a question for the word geeks.  I looked up distichiasis, distichous, and distich.  The latter noun is a term used for two lines of verse, usually a rhyming couplet.  The adjective is used in botany to refer to two vertical rows of leaves (or for two-part antennae in zoology).  The root is obviously Greek "di" - two;  the stichos part means "row."  Are there English words incorporating stichos other than the ones in this group?

Addendum:  Reader AF found "acrostic" and "stichomancy" (divination by lines of verse in books taken at hazard).  See the link in his comment for more.