I have few regrets in life (almost all of them for things I didn't do, rather than for things I did); I do wish that I had gone to Woodstock in 1969. If so, I would have heard this cover version of the Beatles' "With a Little Help From My Friends," which Joe Cocker performed in his inimitable style, with altered meter, different key, and different chords (and which was subsequently covered in turn by John Belushi on Saturday Night Live).

But back to the video embedded above. This one has subtitles - not, mind you, the real ones, but the ones that Joe Cocker sounds like he's saying. By the time it's over you may forget what the original lyrics were - if so, revisit the original Woodstock performance HERE.

Addendum: The YouTube video was pulled, but what appears to be the same one has been resurrected here.

Reposted from 2008 (!) after I discovered the video has been resurrected (probably only temporarily).  Several other links have undergone linkrot in the interim, but on re-viewing, I discover that the video actually includes a brief image at 2:18 that fits in with a separate theme on this blog... 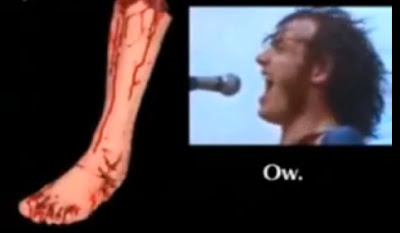