The man who discovered Pluto is on his way there.


While a young researcher working for the Lowell Observatory in Flagstaff, Arizona, Tombaugh was given the job to perform a systematic search for a trans-Neptunian planet (also called Planet X), which had been predicted by Percival Lowell and William Pickering.

[In 1930] Tombaugh used the observatory's 13-inch astrograph to take photographs of the same section of sky several nights apart. He then used a blink comparator to compare the different images. When he shifted between the two images, a moving object, such as a planet, would appear to jump from one position to another, while the more distant objects such as stars would appear stationary. Tombaugh noticed such a moving object in his search, near the place predicted by Lowell, and subsequent observations showed it to have an orbit beyond that of Neptune... 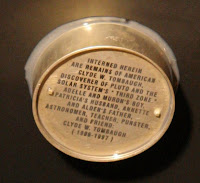 Approximately one ounce of his ashes is being carried on the New Horizons spacecraft, launched in 2006 for a flyby of Pluto in 2015. The container includes the inscription: "Interred [sic] herein are remains of American Clyde W. Tombaugh, discoverer of Pluto and the solar system's 'third zone'. Adelle and Muron's boy, Patricia's husband, Annette and Alden's father, astronomer, teacher, punster, and friend: Clyde W. Tombaugh (1906–1997)".

Re the loss of planetary status:


Tombaugh's widow Patricia stated after the IAU's decision that while Clyde may have been disappointed with the change since he had resisted attempts to remove Pluto's planetary status in his lifetime, he would have accepted the decision now if he were alive. She noted that he "was a scientist. He would understand they had a real problem when they start finding several of these things flying around the place."


And some bonus info:


The name "Pluto" was reportedly suggested by Venetia Burney, then an 11-year-old English school girl... It won out over numerous other suggestions partly because it was named after the Roman god of the underworld because he was able to render himself invisible and because Percival Lowell's initials PL formed the first 2 letters. The name Pluto was officially adopted on May 1, 1930.