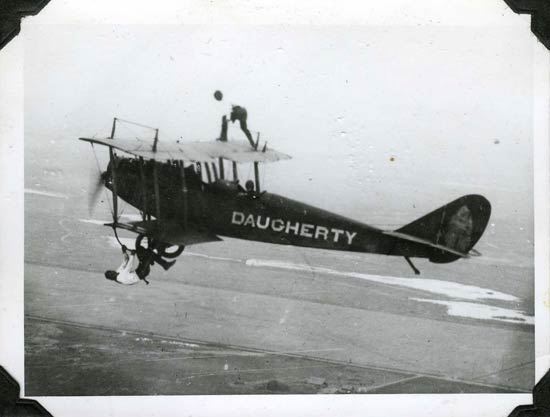 Ormer Locklear is the first man credited with bringing wing walking to the forefront of American aviation and air shows...  While there are a variety of reasons given for Lt. Ormer Locklear's first walk out on the wing in 1918, the New York Times reports in an August 4, 1920 article that he had originally begun wing walking because he conceived the idea that it would be possible to mount machine guns on the wings of a plane. Army officers said it would be impossible to maneuver with a man’s weight on the extreme edge of the wings, and some of his first “stunts” were done to demonstrate that a plane so weighted could be maneuvered. According to the US Centennial of Flight Commission, although Locklear could have been court-martialed for such antics, his commanding officer encouraged him, instead, to perform more "stunts" because they boosted his colleagues' moral, and their confidence in the soundness of their Jenny biplanes, which were suffering a rash of accidents at the time...

Additionally, Locklear was the first person to transfer from one plane to another in flight. This is what inspired and led to the world's first air-to-air refueling in 1919. Wesley May, with a five-gallon can of gasoline strapped to his back, transferred from a Standard flown by Frank Hawks to a Jenny piloted by Earl Daugherty...

Text from the Atlantic Flyer.   The photo is not of Ormer Locklear, but of Clarence "Ace" Bragunier.

Information found while researching the "first law of wingwalking" -

I wanted to use that quote to respond to a young woman in Sweden who is a software developer.  She has received an offer of a job in California from Microsoft, but emailed me because the current economic turmoil in the U.S. was making her decision more difficult.  Personally I would err on the side of caution if her current employment is reasonable, but I'm an old man and she's a young woman who could probably recover from an unexpected job dislocation were Microsoft to downsize after she got there.

Any readers of this blog work for Microsoft?  Can you comment on whether a prolonged recession is likely to cause layoffs there?  Or have other advice relevant for her?