One BILLION vehicles in the world 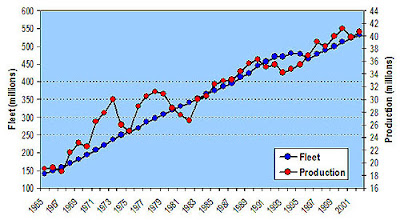 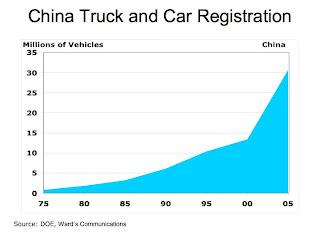 As reported by Ward's Auto:


The number of vehicles in operation worldwide surpassed the 1 billion-unit mark in 2010 for the first time ever. According to Ward’s research, which looked at government-reported registrations and historical vehicle-population trends, global registrations jumped from 980 million units in 2009 to 1.015 billion in 2010...

The market explosion in China played a major role in overall vehicle population growth in 2010, with registrations jumping 27.5%. Total vehicles in operation in the country climbed by more than 16.8 million units, to slightly more than 78 million, accounting for nearly half the year’s global increase. The leap in registrations gave China the world’s second-largest vehicle population, pushing it ahead of Japan, with 73.9 million units, for the first time.

U.S. registrations grew less than 1% last year, but the country’s 239.8 million units continued to constitute the largest vehicle population in the world.

Data such as these have not deterred presidential candidate Michelle Bachmann from promising $2.00 gasoline if she is elected president (via Cynical-C):

YouTube link.
An interesting article at MinnPost discusses what she would have to do to fulfill that promise.


A president of the United States can drive gasoline prices down, and the promise to do so is not new... likely, she is looking at Newt Gingrich's plan from 2008. Gingrich proposed opening up the spigots on the country's Strategic Petroleum Reserve and dumping the whole stockpile on the open market... But once you have emptied the 727 million barrels of crude from the SPR on the market, which the world would drink up in a month (faster, if cheaper), there would be nothing left in the strategic tank... the price of gasoline at the pump would fall below $2 a gallon for about a week before oil investors figured out it was only a political gag... Of course, she could, with Congress's help, open the Arctic National Wildlife Refuge (ANWR) to drilling. That would cause a slight lowering of prices for a short time. The U.S. Geological Survey estimates there are roughly 7 billion barrels of recoverable crude in the ANWR. Americans consume more than 20 million barrels of petroleum a day. So if we kept all that oil for ourselves, we would use every last drop of it within a year...

More discussion at the link re shale oil recovery, etc.

Credit for top and second images.