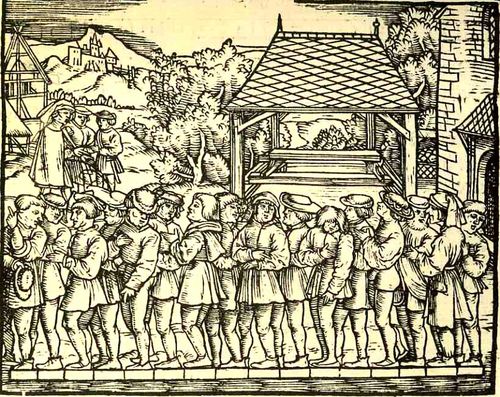 From Ptak Science Books, a discussion of an early woodcut:


...a delightful woodcut from Jacob Koebel's 1522 Von Ursprung der Teilung, Mass und Messung dess Ertrichs, der Ecker, Wyngarten, Krautgarten und anderer Velder..., an early surveying handbook (probably the first ever printed in Germany) that could be used to measure and set out (as stated in its title) herb gardens, vineyards, farms and the like. I'm not 100% sure of this, but I think what is going on in this image is the measuring of a rod (or "rute" in German), which is about 5.5 meters or 16 feet; and what we have in the picture is 16 men being positioned over a measuring device...

And this from Wikipedia's discussion of the "foot" measurement:


The popular belief is that the original standard was the length of a man's foot... The average foot length is about 9.4 inches (240 mm) for current Europeans. Approximately 99.6% of British men have a foot that is less than 12 inches long. One attempt to "explain" the "missing" inches is that the measure did not refer to a naked foot, but to the length of footwear, which could theoretically add an inch or two to the naked foot's length. This is consistent with the measure being convenient for practical uses such as building sites. People almost always pace out lengths while wearing shoes or boots...

It appears to me that Koebel is recommending that instead of taking an arbitrary person's foot, it would be better to assemble 16 men to create the standard of measurement, thereby improving the consistency of the measurement from town to town.