Can your cryptanalysis skills help apprehend a vandal? 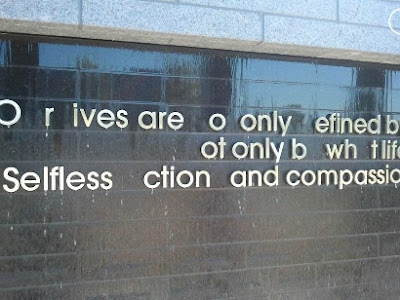 Most of you will remember the tragedy that occurred in 2007 when an interstate highway bridge spanning the Mississippi River in Minneapolis suddenly collapsed, killing 13 people.

This week a memorial in memory of the victims was unveiled.


The memorial includes a row of 13 vertical steel I-beams, each engraved with the name of someone who died in the collapse and a personal tribute written by relatives.

"Our lives are not only defined by what happens, but by how we act in the face of it, not only by what life brings us, but by what we bring to life. Selfless actions and compassion create enduring community out of tragic events."

Within two days of the unveiling of the memorial, some scumbag vandalized it by removing letters.  Of interest, the letters removed were noncontiguous, suggesting that the malefactor was not taking them for the metal value of the stainless steel, but to spell a message - probably his name.

Authorities have subsequently received many requests for a list of the letters; today they responded:

I couldn't come up with anything.  "Stan awed uglier gym woman" certainly isn't relevant.  Perhaps you can do better.

p.s. - if you're going to tackle anagrams, I highly recommend taking advantage of specialized web resources, such as the page at Wordsmith.