Something round under the ground at King's Knot 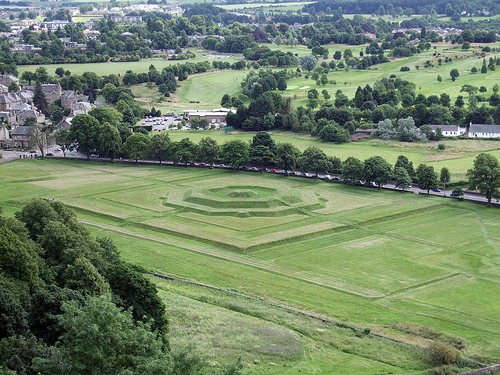 Archaeologists using remote sensing devices have found evidence of a round subsurface structure at the fabled "King's Knot" at Stirling Castle.  As reported in The Telegraph:

Though the Knot as it appears today dates from the 1620s, its flat-topped central mound is thought to be much older. Writers going back more than six centuries have linked the landmark to the legend of King Arthur.
Archaeologists from Glasgow University, working with the Stirling Local History Society and Stirling Field and Archaeological Society, conducted the first ever non-invasive survey of the site in May and June in a bid to uncover some of its secrets. Their findings were show there was indeed a round feature on the site that pre-dates the visible earthworks...

Around 1375 the Scots poet John Barbour said that "the round table" was south of Stirling Castle, and in 1478 William of Worcester told how "King Arthur kept the Round Table at Stirling Castle". Sir David Lindsay, the 16th century Scottish writer, added to the legend in 1529 when he said that Stirling Castle was home of the "Chapell-royall, park, and Tabyll Round".

It has also been suggested the site is partly Iron Age or medieval, or was used as a Roman fort.

Further details at the link. Photo via Archaeology News Network.