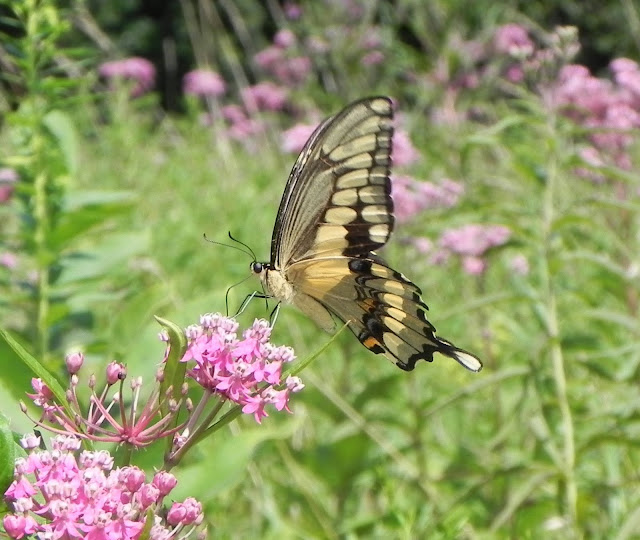 The combination of family activities and the perturbations of the stock market have kept me totally busy this week, and there likely will be no respite for a few more days, but thought I'd take a moment tonight to at least share some pix taken last weekend during a field trip with the Southern Wisconsin Butterfly Association to the area in south central Wisconsin marked on this map.

The top embed is a photo of a Giant Swallowtail. This has historically been a butterfly of the southern United States, since its preferred food plants are citrus trees.  Until a few years ago they were seldom seen in Wisconsin, but last year they appeared across much of the state, and this year they have been relatively abundant; we saw them nectaring on flowers in our back yard almost daily in late July/early August.  They are capable of using some northern trees (prickly ash) as food plants for their caterpillars, and even though none of us have seen the larva here, we suspect from the number we're seeing that they are probably reproducing locally (some would argue that changes in the phenology like this are reflections of global warming, which we won't get into with this post).

These are large, handsome butterflies - the largest in our state (about the size of a small bird) and it's a real treat to see their powerful flight.  When they're absorbed by their nectaring activity you can sneak up to with a couple feet and get nice photos of them (though they seldom hold their wings still).  This particular field had wildflowers, including Joe Pye Weed, that were over 6 feet high, so it was easy to stalk the butterflies. 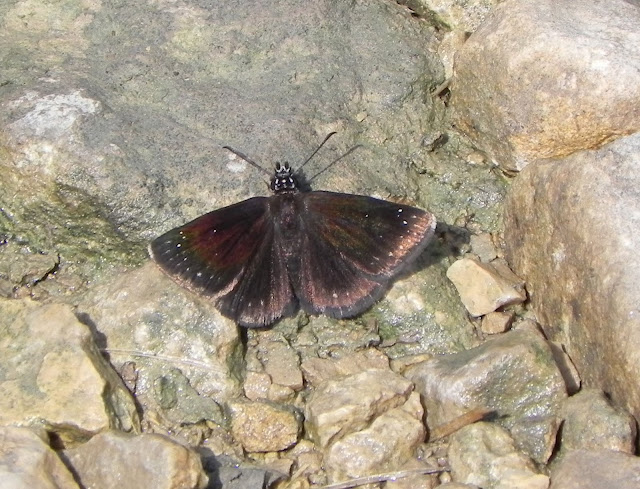 Another uncommon "immigrant" butterfly now being spotted with increasing frequency is the Common Sootywing, shown above.  In contrast to the Giant Swallowtails, these are subtle creatures that fly close to the ground and whose dark colors blend in well with the landscape.  We found this one "puddling" for minerals at wet spots on a gravel path on the margins of a shady woods. 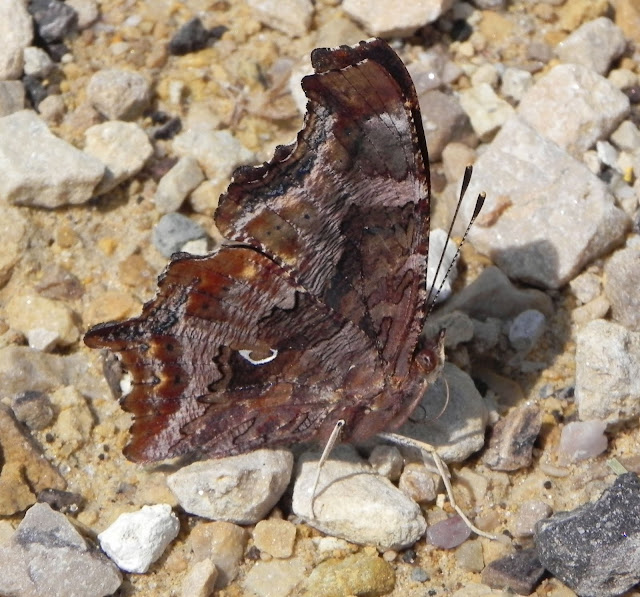 Also on gravel, and right next to a busy highway, was this Eastern Comma.  Its name is derived from the shape of that little white mark on the underside of the hind wing (its near-relative, the Question Mark, has a slightly differently curved white mark).  I was surprised that he let me get my camera lens within a couple inches of him for the portrait, but then discovered that he wasn't going anywhere because he was injured and/or dying.  Perhaps had been hit by a car, or just reaching old age.  I was actually able to pick him up because he was too weak to fly away. 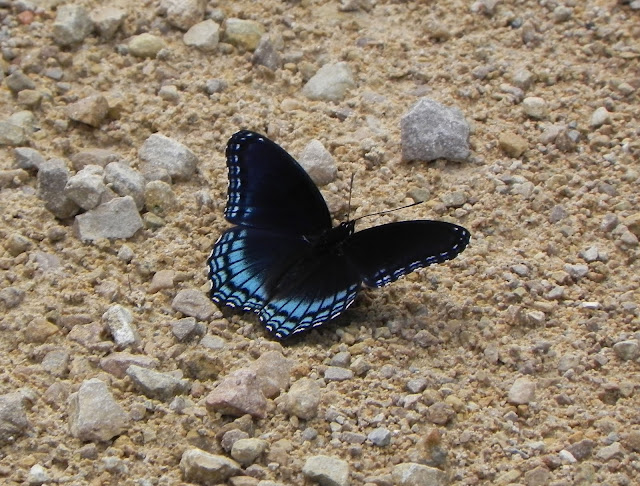 This guy wasn't weak at all.  I've been wanting for a long time to get a good photo of the metallic blue dorsum of the wings of a Red-spotted Purple.  Last year I had photographed the underside of the wings of one in our back yard: 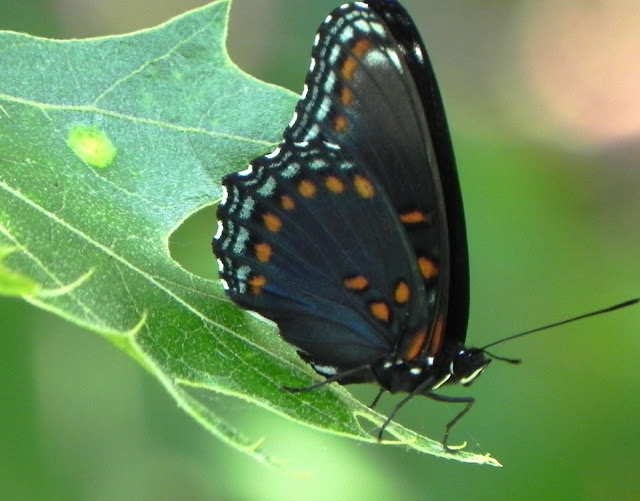 This one was displaying the fairly typical behavior of seeking minerals from a gravel road, but he was healthy and cautious, and not about to let me approach him.  Every time I got within telephoto lens distance he launched himself in the air further down the road; I suppose I followed him about a half mile before I was able to get a reasonable photo.

On this field trip we saw 20 other species (!).  I'll spare you the details, and just close with this little fellow: 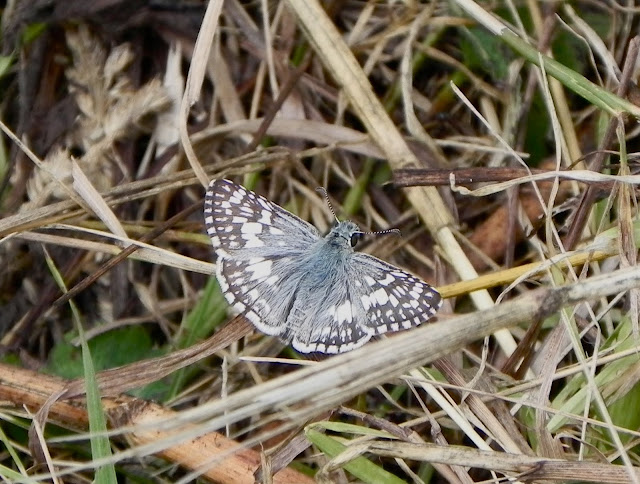 I had never seen a Common Checkered-Skipper before.  He comes from the Spread-wing Skipper family, whose butterflies tend to be rather inconspicuous in their coloration, but this one's salt-and-pepper pattern is quite striking.  The color in the image isn't quite accurate because of the glare of the sun on his wings, but it was the best I could do before he disappeared into the weeds again.

This trip to the Avoca area was likely the most productive one of the season in terms of varieties of butterflies seen.  There's one more field trip on August 27 to the Pheasant Branch Conservancy in Middleton, Wisconsin.  Any TYWKIWDBI readers in the area are welcome to come along; it's free, and the company is delightful (all these trips are totally weather-dependent, BTW; if it's cloudy/windy/rainy then there's not much point in going).