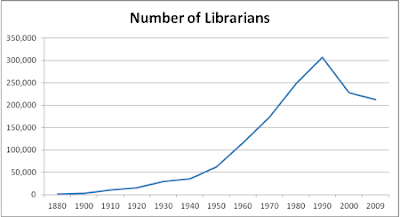 Excerpts from an article at the Oxford University Press blog:


The U.S. Census first collected data on librarians in 1880, four years after the founding of the American Library Association. They only counted 636 librarians nationwide... The number of librarians grew over the next hundred years, peaking at 307,273 in 1990. Then, the profession began to shrink, and as of 2009, it had dropped by nearly a third to 212,742. The data enable us to measure the growth, the gender split in this profession known to be mostly female, and to explore other divides in income and education, as they changed over time.