Scanning EM of a "hydrothermal worm" 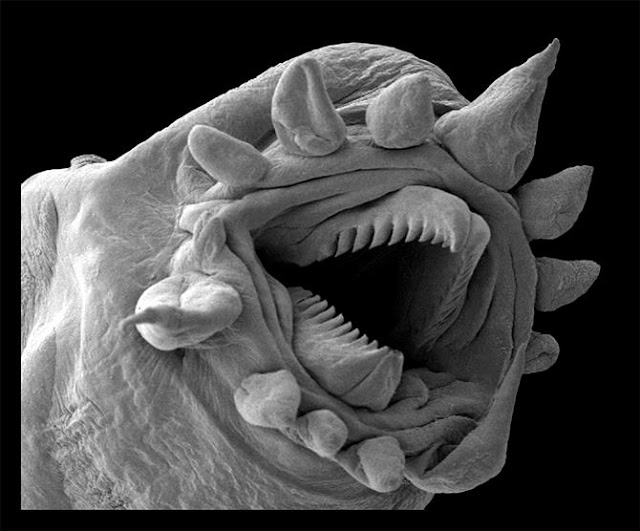 Credit to FEI (makers of electron microscopes), via Dark Roasted Blend.  Unfortunately no further info*, except that it's a marine organism, so it probably lives near a black smoker or somewhere like that.

*Addendum:  tentatively identified as Lepidonotopodium piscesae by Anon at BoingBoing. (Tx for the heads-up, Cobwebs).

Second addendum, from my cousin's husband, who is a professor of Microbiology and has gone down to the vents in Alvin:


Probably belonging to the genus Alvinella or Paralvinella.  These are relatively small vent worms that have numerous filamentous sulfur bacteria attached to their outer surface.  Unlike the large vent worms with internal symbionts Alvinella etc. probably graze on bacteria and archaea as food sources, hence the rather dramatic mouth.  There was a highly controversial (= almost certainly wrong) claim about the upper temperature limits of these worms being well above that of any other known metazoan.  Details available on that if you want them.