Department of Defense spending during my lifetime 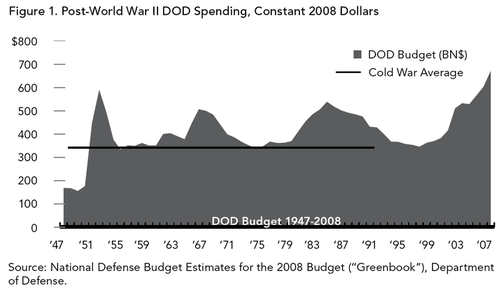 This graph is better than most because the data used are expressed in inflation-adjusted dollars.


Lacking in requisite political direction and without the internal tools (or will) to prioritize, DoD lumbers along, occasionally forced to defend its total spending against other discretionary outlays, but never really having to defend how it allocates what it spends internally.  Adding to the dysfunction is the sorry state of our political system, in which one party's adult leadership (the Democrats) is terrified to take on DoD for fear of looking weak, and the other party's adult leadership (the Republicans) is unable to apply its flinty aversion to government growth to national security apparatus of the country.

More at Information Dissemination, via The Dish.