"The Brendan Voyage" - crossing the Atlantic in a leather boat 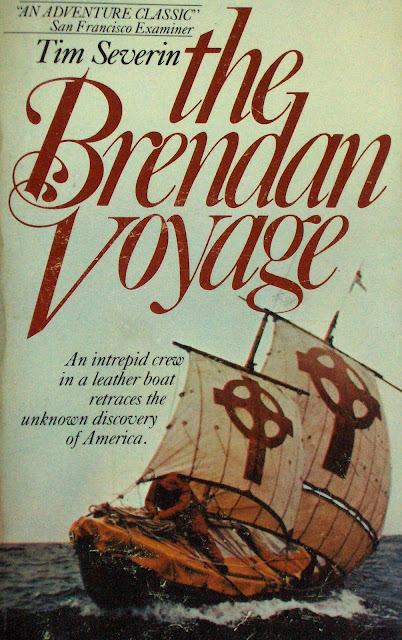 The legend of Saint Brendan of Clonfert alleges that in the sixth century this Irish monk and his followers undertook an epic sea journey during which they ventured across the Atlantic Ocean, perhaps reaching North America.


Some have alleged that Christopher Columbus relied on the manuscript "Navigatio sancti Brendani abbatis" that told of St. Brendan's travels across the Atlantic. It is well established that Columbus went to look for St. Brendan’s Isle when he discovered the West Indies.  As a student of the University of Pavia, Columbus would have learned of Brendan’s voyage from the manuscripts brought there, seven hundred years previously, by Dugal, student and founder of the University of Pavia. On the eve of his great voyage in 1492 he wrote: “I am convinced that the terrestrial paradise is in the Island of Saint Brendan, which none can reach save by the Will of God.

This book tells of the author's attempt to test the possibility that such a voyage could have occurred.  He commissioned some of the finest craftsmen in Europe to build a leather boat whose timbers were lashed together with flax.  He and his companions then sailed this curragh from Ireland (see "The Skelligs") to the Faroes, from there to Iceland, then past Greenland to Newfoundland.

I've previously posted one excerpt from the book (see the "collarmaker's palm" post).  Here are some other tidbits -


"A swell was entering the channel between the islands, and when we hit it, we began to sway up and down on the waves.  The effect was like riding a roller-coaster at the fairground.  Brendan began to toboggan on the waves, running down the wave fronts at eight or ten knots.  From time to time she actually broke free of the main mass of water and began to surf, up on top of the main body of the wave and racing forward.  Then the log would spin up to its maximum of twelve knots, and the needle stuck there, hard against the end stop.  The ride was exhilarating and breathtaking.  Here was a boat from the Dark Ages sailing as fast as many modern yachts, and the sensation was unique..."


"Above all, the leather skin needed to be tough enough to survive the increased sagging and wrinkles, and the miles of flax thread were now under greater strain than ever before... It occurred to me that what a medieval boat-builder might have lacked in his knowledge of naval architecture, he gained in the quality of the materials he used, materials which he had selected critically and then prepared with the utmost care.  Aboard Brendan we were learning this lesson for ourselves in a host of small ways.  Item by item, our modern equipment was collapsing under the conditions.  Our shiny, new, modern metal tools, for example, had virtually rusted away, despite their protecting layer of oil.  After a month aboard Brendan, a tempered saw blade simply snapped like a rotten carrot; a miner's lamp, which I had hoped to use as a night light, was useless.  Tough enough for a lifetime's use in the mines, its metal gauze had corroded into a solid mass, and its iron rivets dropped streaks of rust.  Of our modern materials, only the best stainless steel, the solid plastic, and the synthetic ropes were standing up to the conditions.  It was instructive that whenever a modern item broke, we tended to replace it with a homemade substitute devised from the ancient materials of wood, leather, and flax.  These we could work and fashion, sew and shape to suit the occasion... As the weather turned colder, we had replaced our clothes of artificial fiber in favor of old-fashioned woolen clothes, reeking of natural wool oil... our oiled wool sweaters thigh-length wool sea-boot socks, and cowl-like woollen helmets were not materially diffferent from the garments available in Saint Brendan's day."

"It turned out that his family, the Paturssons, were among the longest-established families in the Faroes.  Their log house was almost a national monument by Faroese standards, as the oldest continually occupied house in the islands.  The Paturssons had lived there, father to son, for eighteen generations..."

I enjoyed the book and have added it to the recommended books category of the blog.  I was most interested in the construction of the curragh; the details of the voyage itself I breezed over more quickly.  Those of you with an interest in sailing might derive additional enjoyment from that material, especially the part about what to do when a pod of killer whales approaches your grease-coated leather boat.

scantling  - a thin timber used to frame a house or boat; a small quantity.

macedoine - a mixture of fruits and vegetables, often served as a salad; a medley (Fr., rel to “Macedonia” perhaps because of the racial diversity there)

williwaw - a sudden violent cold wind in the Strait of Magellan

“We also rummaged Brendan at the boatyard” ("old traditional practice of removing every single item from the boat, cleaning her gear and inspecting the hull.")

TL;DR - This book doesn't prove that St. Brendan made his legendary voyage, but it does demonstrate that transoceanic travel was possible in the pre-Columbian and pre-L'Anse aux Meadows eras.