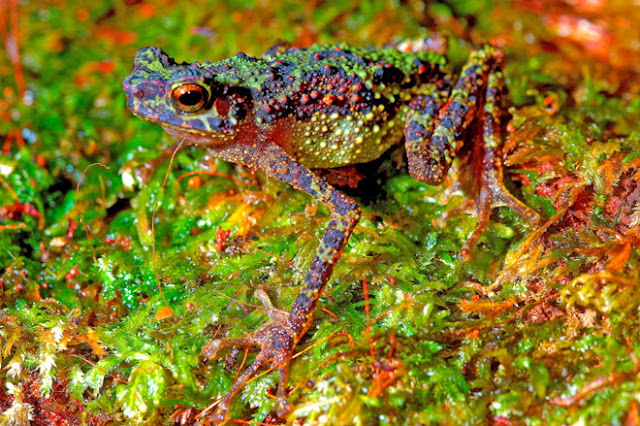 Everyone seems to be blogging this photo of a newly-rediscovered toad, so it's not a TYWK, but I wanted to include it here too -


The spindly-legged species was last seen in 1924 and European explorers in Borneo only made monochrome illustrations of it...  Indraneil Das of Universiti Malaysia Sarawak decided to hunt down the lost frog, and his team looked in the nearby area of Western Sarawak. In the summer of 2010 they made evening searches along the 1,329 meter high ridges of the Gunung Penrissen range to look for the toad. After months of fruitless hunting, Das decided to include higher elevations in the team’s search. Then, one night, graduate student Pui Yong Min found the small toad two meters up a tree...

The slender-legged critter is only the second species on the “World’s Top 10 Most Wanted Lost Frogs” list to be found... The other frogs include the Costa Rican golden toad, the Australian gastric brooding frog, the Mesopotamia beaked toad from Colombia, Jackson’s climbing salamander, the African painted frog, the Venezuelan scarlet frog, the hula painted frog and the Turkestanian salamander — this hide and seek champion hasn’t been seen since 1909.

There's more information at mongabay.com, including this:


Unfortunately the habitat in which it is found it not currently under protection and is threatened by forest fragmentation, poaching, and resort development. Dr. Das told The New York Times that the area is currently accessible due to the construction of a resort, including an 18-hole golf course...

The exact location of the rediscovery of the frog is being withheld given concerns it would become targeted for the pet trade, especially with its bright and unique coloring.