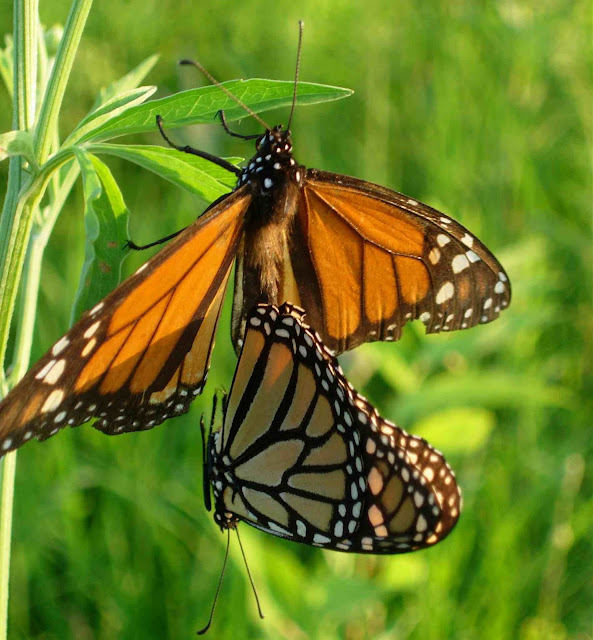 In March, ecologist Lincoln Brower of Virginia’s Sweet Briar College expressed concern that monarchs are perilously close to collapse. But in June, University of Georgia ecologist Andrew Davis found no clear population trend in the counts from two U.S. monitoring stations. Both studies were published in the journal Insect Conservation and Diversity.

“I wrote my paper because I wanted people to see a different side of the story,” said Davis, a member of Monarch Net, a cooperative network of monarch monitoring programs. “I think the situation is not as simple as Dr. Brower and his colleagues make it out to be.”

Brower, who has studied monarchs for 55 years, worries that Davis’ paper will give people a false sense of security. “He’s generated a controversy here that could be detrimental to the conservation of monarchs in Mexico,” Brower said...

Brower’s paper summarizes how much area overwintering monarchs have occupied over the past 17 years, of which the last 15 have seen steady diminishment. During the 2009-10 winter season, the butterflies covered less than five acres, an all-time low. Last season, they rebounded to cover roughly 10 acres, an area still only half of the 15-year average.

“What is going on on the ground down there is a disaster,” Brower said...

These fall counts capture the butterflies after a summer of reproducing: The average female monarch lays 700 eggs during her lifetime. Davis believes the monarch’s reproductive prowess outweighs the trend seen in overwintering populations in Mexico.

Most of the butterflies traveling through Cape May and Peninsula Point don’t travel to the overwintering grounds in Mexico, but Davis believes they still give important numbers.

I'll weigh in on this.  We have about 200 milkweed plants in our gardens.  So far this year we have found a grand total of... four... monarch eggs.  Normally we would have found 50-100 by now.  It has been rare to see Monarchs in our yard or in the parks this year; in past years they have been common.

I joined a group from the Southern Wisconsin Butterfly Association for the annual Fourth of July butterfly count several weeks ago; the number of monarchs seen in the Madison area was historically low.  My totally amateur best-guess explanation is that the record drought in Texas this spring/summer devastated the population leaving Mexico.  Those monarchs typically reproduce in the Texas/Okla area before the next brood heads north; I'll bet the ones arriving from Mexico didn't find enough milkweed to oviposit on.  Just a guess.

Addendum: Another theory, discussed in the New York Times' discussion of these research reports, is that the more widespread planting of genetically-modified crops, accompanied by more extensive use of Roundup herbicide, is contributing to a fall in the number of milkweed plants (required by the Monarchs as a food plant).


Roundup Ready crops contain a bacterial gene that allows them to withstand Roundup or its generic equivalent, glyphosate, allowing farmers to kill the weeds without harming the crop.

Because they make weed control much easier, the crops have been widely adopted by farmers. This year, 94 percent of the soybeans and 72 percent of the corn being grown in the United States are herbicide-tolerant, according to the Department of Agriculture.

That in turn had led to an explosion in the use of glyphosate, according to the Environmental Protection Agency. About five times as much of the weed killer was used on farmland in 2007 as in 1997, a year after the Roundup Ready crops were introduced, and roughly 10 times as much as in 1993...

“It kills everything,” said Lincoln P. Brower, an entomologist at Sweet Briar College who is also an author of the paper documenting the decline of monarch winter populations in Mexico. “It’s like absolute Armageddon for biodiversity over a huge area.”

The amount of milkweed on farms in Iowa declined 90 percent from 1999 to 2009, according to Robert G. Hartzler, an agronomist at Iowa State. His study, published last year in the journal Crop Protection, found milkweed on only 8 percent of the corn and soybean fields surveyed in 2009, down from 51 percent in 1999...

But the sheer amount of farmland in the Corn Belt has meant that farms, in aggregate, have accounted for a vast majority of monarch births, according to another study published by Dr. Oberhauser and colleagues in 2001. That study estimated that in Iowa, farms produced 78 times the number of monarchs as nonagricultural sites, and in Wisconsin and Minnesota, 73 times as much...

More at the link.  Hat tip to Laura for the link.