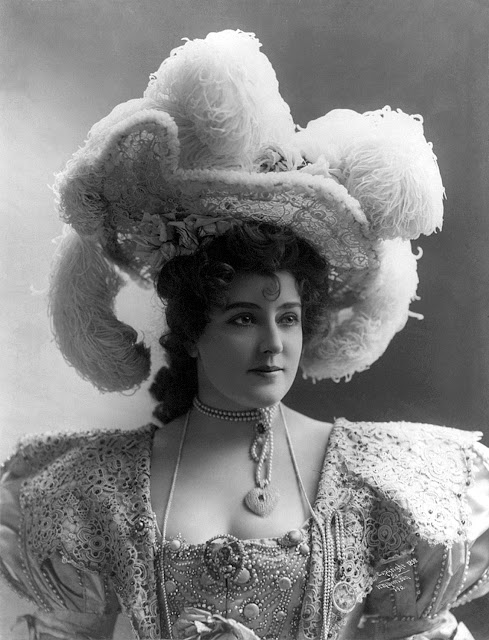 Inspired by this awesome photo at Vintage Photography, I decided to look up some details re her life:


Russell was born Helen Louise Leonard in Clinton, Iowa. Her father was newspaper publisher Charles E. Leonard, and her mother was the feminist Cynthia Leonard, the first woman to run for mayor of New York City... She gave birth to a son... but the baby died after being stuck with a diaper pin by his nanny; the pin penetrated his stomach...

For many years, Russell was the foremost singer of operettas in America. Her voice, stage presence and beauty were the subject of a great deal of fanfare in the news media, and she was extremely popular with audiences... When Alexander Graham Bell introduced long distance telephone service on May 8, 1890, Russell's voice was the first carried over the line...

For forty years, Russell was also the companion of businessman "Diamond Jim" Brady, who showered her with extravagant gifts of diamonds and gemstones and supported her extravagant lifestyle... After 1904, Russell began to have vocal difficulties, but she did not retire from the stage. Instead, she switched to non-musical comedies... In later years, Russell wrote a newspaper column, advocated women's suffrage (as her mother had), and was a popular lecturer, advocating an optimistic philosophy of self-help and drawing large crowds. During World War I, she recruited for the U.S. Marine Corps and raised money for the war effort. Russell became a wealthy woman...

Russell died at her home in Pittsburgh, Pennsylvania, on June 6, 1922, shortly after a completing a fact-finding mission to Europe on behalf of President Warren Harding. The mission was to investigate the increase in immigration. She recommended a five-year moratorium on immigration, and her findings were instrumental in a 1924 immigration reform law... She was buried with full military honors.

Text from Wikipedia, which has links to the primary sources.

Addendum:  Here's a comment from reader KenGilberg: "I have a bunch of Lilian Russell photographs. About 25 years ago I used to haunt an antique shop in NYC that offered the belongings of those who died without heirs. Lillian's daughter, Dorothy (who changed her name from Lillian) married a guy twenty years younger. When he died, it went to the shop. I have pictures of Lillian Russell's lavish apartment, scrapbooks, pictures of her with Warren G. Harding (Lillian married a guy who was an ambassador), and even a photo of Cynthia Leonard and her husband, Lillian's father. Any idea what I might do with the pictures?"   Anyone have suggestions for Ken?