Obesity in the United States 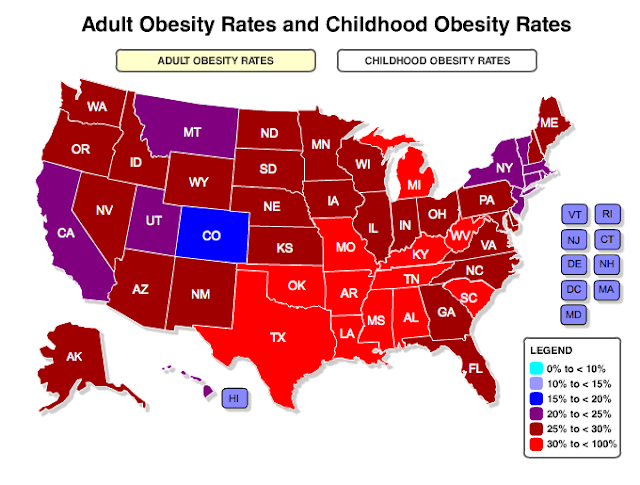 I posted last week about the obesity epidemic in the U.S.  I don't want to beat the subject to death, but I just found data from an extensive study published by the Robert Wood Johnson Foundation.  Here's an excerpt-


Adult obesity rates increased in 16 states in the past year and did not decline in any state, according to F as in Fat: How Obesity Threatens America's Future 2011, a report from the Trust for America's Health (TFAH) and the Robert Wood Johnson Foundation (RWJF).  Twelve states now have obesity rates above 30 percent. Four years ago, only one state was above 30 percent...

Twenty years ago, no state had an obesity rate above 15 percent.  Today, more than two out of three states, 38 total, have obesity rates over 25 percent, and just one has a rate lower than 20 percent. Since 1995, when data was available for every state, obesity rates have doubled in seven states and increased by at least 90 percent in 10 others...

“Today, the state with the lowest obesity rate would have had the highest rate in 1995,” said Jeff Levi, Ph.D., executive director of TFAH. “There was a clear tipping point in our national weight gain over the last twenty years, and we can't afford to ignore the impact obesity has on our health and corresponding health care spending.”

Additional text at Trust for America's Health, where the image is interactive and you can access state-specific data.

Email ThisBlogThis!Share to TwitterShare to FacebookShare to Pinterest
Labels: medicine, other, sociology