The economic crisis in Greece 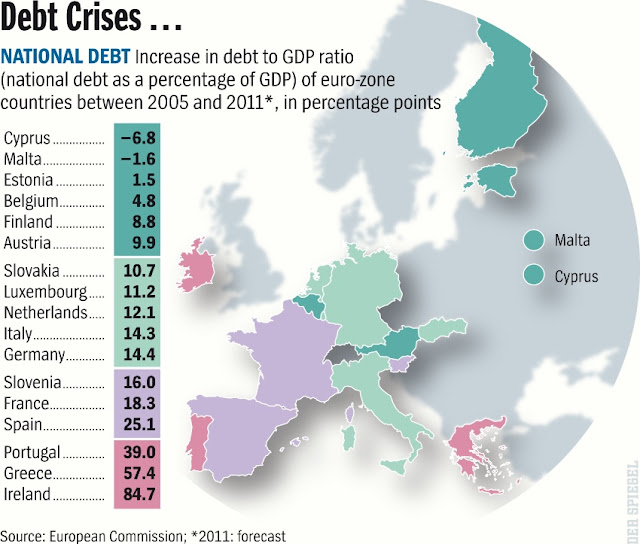 It may have fallen off the front pages in favor of Casey Anthony garbage, but it hasn't gone away.  Excerpts from an article in Spiegel Online:


Last week, Prime Minister Georgios Papandreou once again succeeded in getting a majority of Greek lawmakers to push through an austerity and privatization package worth €78 billion ($111 billion). In doing so, he was responding to pressure from the International Monetary Fund (IMF), the European Central Bank (ECB) and the European Commission. Indeed, many economic experts see the package's measures as the only way to fend off an imminent national bankruptcy at the last minute -- and the only way to save the euro from an even worse fate...

...roughly 930,000 of Greece's 960,000 registered companies have fewer than five employees. Most of these very small companies are "not very competitive," he says, and primarily focus on providing products and services to the 3.5 million private households in Greece. If household incomes sink, consumer demand will automatically fall as well. As Robolis sees it, this would mean a swift end to these small companies because they don't have enough liquidity to tide them over.

"That's exactly what's happened," Robolis complains. Over the last year, roughly 60,000 of these mini-companies have gone belly up, and he predicts at least as many closings in 2011... According to official data, unemployment is expected to climb to between 17 percent and 18 percent by the end of 2011, but the true figure could be as high as 23 percent. "That would be 1.2 million jobless people," Robolis says. The last time Greece saw something like this was in 1961, when the introduction of modern farming technology put thousands of agricultural laborers out of work.

At that time, the result was a wave of emigration to places like Germany. Robolis thinks the same thing could happen today -- but with one big difference: The people who left Greece in the 1960s were mostly unskilled workers. Robolis fears that the coming wave could be well-educated individuals with college degrees.

Greece has its tourist attractions and agricultural products. But apart from beaches, olive oil and feta, the economy doesn't have much to offer. As much as 70 percent of of Greece's economic output depends on private consumption.