The physics of a "washboard road" 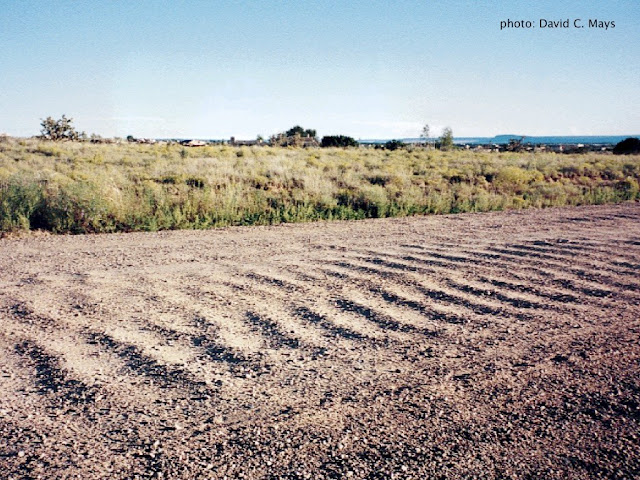 When I visit northern Minnesota, I always encounter a road that in midsummer becomes classically "washboard."  The county sends out a road grader to smooth it and give it a new crown, and a few weeks later it's a washboard again.  I have never understood the physics behind this phenomenon, but tonight I found a good review at this link:


The fact that our simplified systems produce washboard ripples is important since it shows that neither tyres nor suspensions are necessary to obtain washboard roads, although of course, adding a spring, a dashpot, a tyre or an engine would affect the size of the bumps. In other words, it is not because of the suspension of cars that washboard roads exist. The ripple wavelength is NOT simply the speed of the wheel times the bounce frequency of the suspension, which seems to be a common belief...

Using our experimental setup, we were able to obtain washboard roads for wide variety of parameters. Ripples were seen for dry or wet sand, with fine or coarse grains, using long-grain rice or beach sand, with an added spring, for various weights of the wheel and for a large range of speeds. This shows that the phenomenon is very robust (i.e. general). In fact, similar phenomena exist on rail tracks and on ski slopes.

The speed of the wheel appears to be crucial. Indeed, there exists a critical velocity below which the road always remains flat and above which washboard bumps appear. Typically, for a car this critical velocity is around 5 mph or 8 km/h...

The phenomenon is shown experimentally in this video:

An experiment on the formation of "washboard road" ripples. Here there is no wheel or suspension, just a flat plow blade that is dragged over the surface of dry sand. The sand "road" is on the circumference of a rotating table, and the plow support is fixed in the lab frame. This is a stroboscopic movie made of images taken once every table rotation, so the table appears fixed. The ripples move "down the road" (i..e. in the driving direction) which is opposite to the rotation of the table.

(It took me a while to understand that the table is rotating widdershins, and the strobe is making it look like it's going clockwise.)