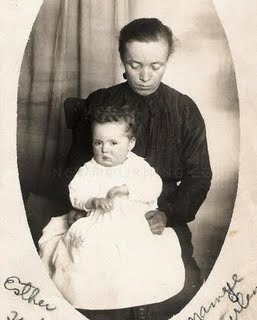 Several months ago I posted an item about the old practice of having your picture taken with (recently) dead family members. Today I encountered an unusual example of the genre; rather than depicting a mother holding a dead infant, it shows a small child on the lap of her dead mother.

However bizarre the image may seem to us today, the rationale of the husband/father is clear - to preserve for the little girl a photo of her being held by her mother. It's rather touching, when you think about it...

The above comments are incorrect; the mother in this photo was alive.  See the discussion thread below.

Found at It'll Take the Snap Out of Your Garters.