This is a Roman "vomitorium" 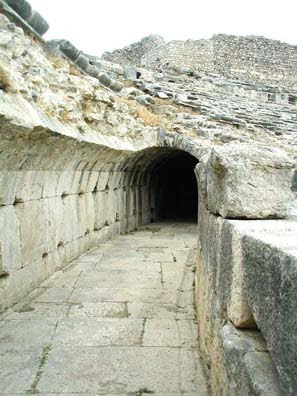 Vomitorium was the proper name for an architectural feature of ancient Roman theatres: it was a wide corridor situated below or behind a tier of seats, through which thousands of spectators could file in and out of quickly (or “spew out of”, to keep the nuance of the Latin word).

The vomitoria of the Colosseum in Rome were reportedly able to allow 50,000 people to enter and be seated within 15 minutes; presumably they would be able to exit in an equally rapid manner, thus earning the passageway its name.

Contrary to schoolboy mythology, vomitoria were not associated with dietary excess and compensatory purging.