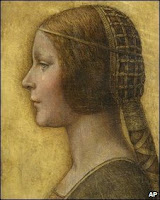 A forensics examiner has found on this portrait a fingerprint that is "highly comparable" to one found on a verified da Vinci from a time period when he worked without assistants. The style of the painting is also compatible with its being a da Vinci, because the cross-hatching has apparently been done by a left-handed artist.

The portrait, which measures 13ins by 9ins, was sold at Christie's in New York in 1998, in an Old Master Drawings sale as a Young Girl in Profile in Renaissance Dress.

If it is accepted as a da Vinci work, its value will rise to the tens of millions of dollars. More details at the BBC article.