A video of Renoir painting in his studio (1917)

Look at those hands.

What you are seeing are the ravages of decades of rheumatoid arthritis.  He has ulnar deviation of his fingers that would be almost unthinkable with modern-day pharmaceutical and physical therapy interventions.

I found a discussion of a Renoir video in a 2001 article in the Harvard University Gazette:


For 44 years a small disc-shaped metal canister rested in a closet at the Comparative Literature Department's office in Boylston Hall. Nobody opened it. Nobody knew what it was...

A note taped to the lid of the canister offered an explanation. The man in the wheelchair was Pierre-Auguste Renoir, the French impressionist painter (1841-1919), whose severe arthritis crippled him during the last years of his life, but did not stop him from painting. The other man was Ambroise Vollard, a well-known art dealer and writer. The woman was "La Boulangère," Renoir's servant and occasional model...

"It's undoubtedly the only moving image that exists of Renoir painting ... or any of the great impressionists, for that matter. There are some motion pictures of famous generals and members of royalty from this period, but movies of painters are extremely rare."..

The film illustrated in the article is not the same one embedded above.

Who made these films?  Recall that Pierre-Auguste Renoir's son was the legendary French film director Jean Renoir.  The pros and cons of that possibility are discussed at the Gazette link.

What was he painting?  We'll never know, of course, but this painting is from the same year: 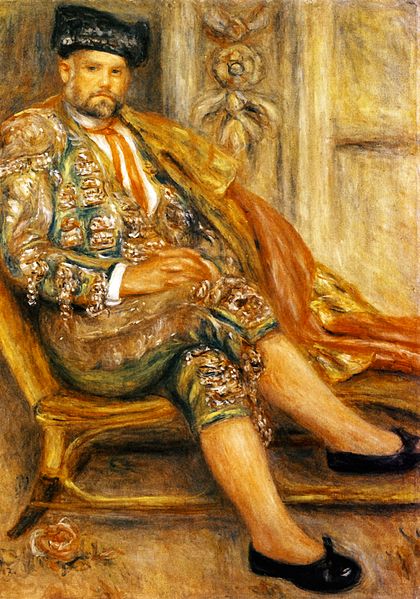 *Addendum:  A hat tip to reader Steve Garcia, who recognized the music as the third movement of Chopin's Concerto No.2 in F minor, Op.21.