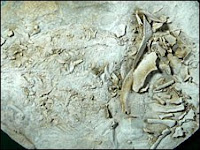 ...documented in this fossil from Australia. In case it's not obvious from the image, the fossil is that of a 380 million-year-old female placoderm fish with an embryo still attached to the mother by an umbilical cord.

"This is not only the first time ever that a fossil embryo has been found with an umbilical cord, but it is also the oldest known example of any creature giving birth to live young... Placoderms represent the most primitive group of jawed vertebrates, so this work shows that the capacity for internal fertilisation and giving birth to live young evolved very early during vertebrate history."

Text and image from this BBC website, which also contains an incredibly useless video.