Fertility and longevity correlate with income 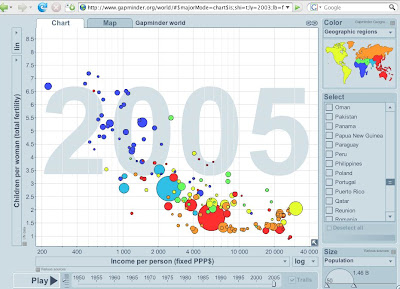 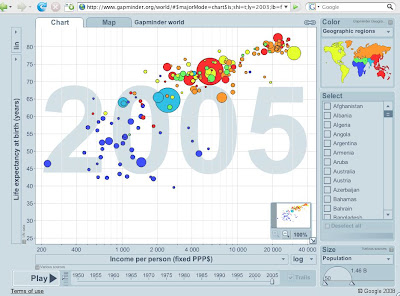 There is a lot of material that requires more work for both of us. War, economics, ethics, history, hard science, and many other subjects are best served with thoughtful entries that consider multiple viewpoints, and are best appreciated by visitors with time to devote to the subject and an open, informed mind.

The graphs above are in this category. Each of them shows average personal income (on the hnorizontal axis) versus another variable (children per women in the top graph, life expectancy in the bottom graph). The images shown would be predictable by many or most of the more widely-read and well-educated readers of TYWKIWDBI.

But there's more than that. Those graphs come from a website called Gapminder. They were created by Hans Rosling, a Swede who used publicly available statistics, and then "crunched" the data using a computer algorithm called "Trendalyzer" (since acquired by Google).

The images above are static screencaps, but the original data MOVES. Each colored dot represents a different country (color corresponds to continents as per map at right), and the size of the dot reflects the number of people in the country. You can hover your mouse over a dot to see which country it is, or find your country from the list at right. The complete database includes all the data from 1950 to 2005. I took a screencap of the image from 2005, but at the Gapminder website you can take the slider at the bottom of the screen, move it to the left to 1950, and then start it moving. The countries move on the graph - the dots get bigger as the population grows, and the dots move up and down, right and left as birth rates and longevity and personal income change. There's a MASSIVE amount of data compressed here into an incredibly viewer-friendly format.

Try it. Go to THIS LINK for the fertility vs. income graph, move the slider left, click PLAY, and see what has happened in the world in the last 50 years.

HERE is the graph for longevity vs. income.

If you find this at all interesting, go to THIS LINK for a "TED talk" (more on TED talks later) by Hans Rosling. I spent my professional career in education and have heard probably thousands of lectures in 40 years. This is one of the best talks I have seen, partly for the topic and partly for the Trendalyzer method of presenting data. Just try 5 minutes (trust me); once he starts the data "moving" you'll probably continue watching to the end.