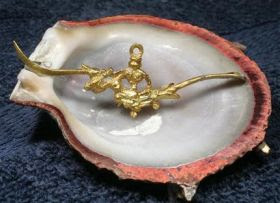 “In this photo released by the Florida Keys News Bureau, a tiny solid gold combination toothpick and earwax scoop is displayed inside a clam shell... A Blue Water Ventures salvage diver recovered the artifact... during a search for remains of the Spanish galleon Santa Margarita that shipwrecked in a 1622 hurricane. According to archaeologists, the 3-inch-long grooming tool is more than 385 years old and was probably worn on a gold chain. Estimated value could exceed $100,000.” (AP Photo/Florida Keys News Bureau, Bob Care)

I love stories about treasure - buried treasure, sunken treasure, lost treasure. But in all my daydreams, never did I imagine finding a "combination toothpick and earwax scoop!" And not only that - it "was probably worn on a gold chain!!"

"Hola! Hernando. You're looking good today - on your way to church? And... WOW... is that ever a nice earwax scoop you're wearing!"