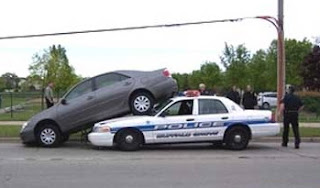 The officer wrote the ticket and returned to the car, and Raskin got ready to drive away. Except he went flying backward.

"(He) apparently was going to pull away at a high rate of speed, but the only problem was that he was in reverse," Kristiansen said.

He said Raskin was not happy about getting a ticket. He said police are reviewing the squad car videotape to see what Raskin might also be charged with.