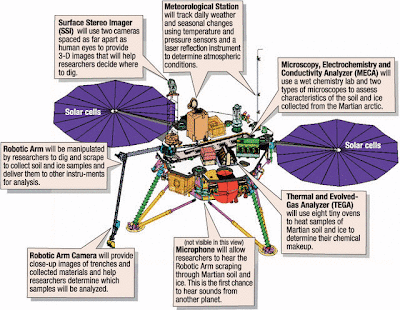 ...scheduled to touch down tomorrow. "The Phoenix Mars Lander, bristling with scientific instruments to poke, probe, look at and analyze Martian soil, ice and atmosphere, has almost reached its destination after a nearly 10-month journey. The Lander will complete its 422 million-mile trek at 4:38 p.m. Sunday... The Lander will, during its scheduled three months of surface operations, seek evidence of water and the elements of life on Mars by analyzing soil and ice samples scooped from the planet's northern arctic region."

Good luck to the University of Arizona team and to the small craft. Too bad its visit has to be so short.