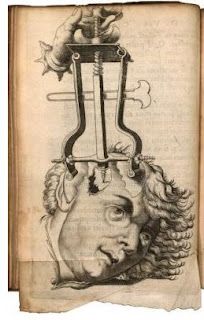 In followup to my previous post about Inca trepanation, here is a link to "An Illustrated History of Trepanation" with more information. More, in fact, than you would probably ever need (or want) to know. It's interesting (though perhaps not surprising) that a prominent name in the history is Ephraim George Squier, who wrote one of the landmark books on the mound builders of North America.

Also interesting is the information about the construction of the Inca tumi blade used in the performance of trepanation: "The patient's head was held tightly between the surgeon's knees, and the tumi blade, which consisted of a sharp piece of flint or copper, was then rubbed back and forth along the surface of the skull. In this way, four incisions arranged in a criss cross pattern, were made in the skull (these are clearly visible in Ephraim's drawing at the top). The tumi blade increased in thickness close to the sharp edge, thus it was prevented from suddenly penetrating the skull to far." Clever and insightful.

The instrument pictured above is a 16th-century three-legged trioploides used to raise depressed skull fractures. The mechanism seems to be not unlike modern wine corkscrews. The article then moves on to modern conventional trepanation and self-trepanation by psychotics: "I could hear gurgling, and I could feel the shifting of volume in the brain water. There was a warm feeling as my metabolism cranked up a bit."