The rapids under old London Bridge 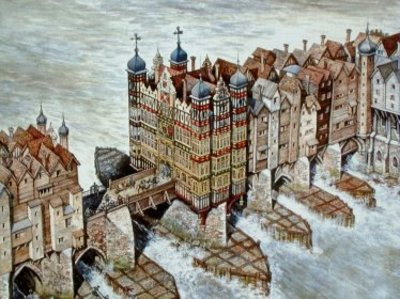 “The location of the bridge's 19 timber pier supports (starlings) was determined by riverbed conditions and this meant that they were varied in spacing across the river. Consequently, the arch spans varied in size too and boats navigating the arches encountered different currents and river conditions at each one. Some were more dangerous than others. Over the years, boatmen christened the arches with various names, such as Gut Lock and Long Entry…

Navigating through the bridge in a boat could be very dangerous because the closeness and number of starlings backed up the river water, creating rapids. In some places the drop in water height from one side of the bridge to the other was more than the height of a man. Many people lost their lives 'shooting' the bridge and "Drowned at the bridge" became a common entry in the registers at nearby graveyards.

Some Londoners presumably did as Cardinal Wolsey did. On his frequent visits to Greenwich to see Henry VIII, he would have his barge stopped above the bridge and get out and travel to Billingsgate by mule, where he would rejoin his barge — providing it had successfully negotiated the rapids.”

(Text and image from the ever-interesting Scribal Terror)