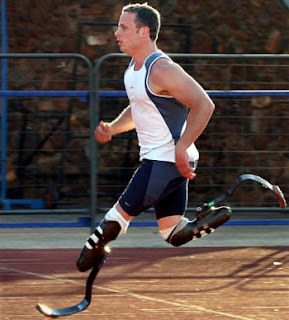 I usually avoid blog entries about sports, celebrities, or other things that will be covered in the conventional media, but this story has some added interest. It will be a topic of conversation - and debate - right through the summer Olympics.

Oscar Pistorius is a South African who was born without fibulas and had both lower legs amputated when he was 11 months old. He presumably wore conventional prostheses for years, but now has been fitted with J-shaped "cheetah feet" made out of carbon fiber. There has been a vigorous debate as to whether these devices provide him with an unfair advantage.

Similar debates have raged in the past over everything from athletic shoes to pole vault poles to swimsuits. Those, of course, were items that all competitors could use if they could afford them; these feet represent a unique conundrum.

I'm a great fan of the principles of Olympic sport, though I detest the inherent (and ever-growing) nationalism, and I'm an even bigger fan of the Paralympics (which I think more closely embodies the true Olympic spirit). So I'll blog this for interest.

And you have to smile at this guy's nickname... Blade Runner.

(Credit to the Presurfer for the image, citing a Gizmodo article)