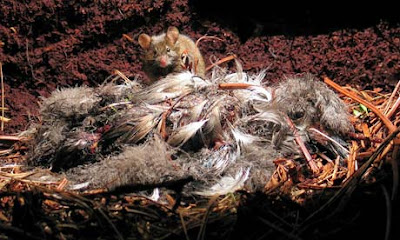 "For tens of thousands of years, the birds of Gough Island lived unmolested, without predators on a remote outcrop in the south Atlantic. Today, the British-owned island, described as the home of the most important seabird colony in the world, still hosts 22 breeding species and is a world heritage site.

But as a terrible consequence of the first whalers making landfall there 150 years ago, Gough has become the stage for one of nature's great horror shows. Mice stowed away on the whaling boats jumped ship and have since multiplied to 700,000 or more on an island of about 25 square miles.

What is horrifying ornithologists is that the British house mouse has somehow evolved, growing to up to three times the size of ordinary domestic house mice, and instead of surviving on a diet of insects and seeds, has adapted itself to become a carnivore, eating albatross, petrel and shearwater chicks alive in their nests. They are now believed to be the largest mice in the world. Yesterday Birdlife International, a global alliance of conservation groups, recognised that the mice, who are without predators themselves, are out of control and threatening to make extinct several of the world's rarest bird species..."

Full story at the Guardian (U.K.).