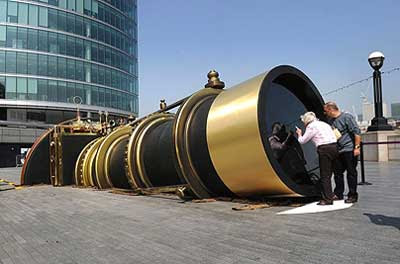 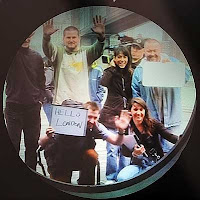 "More than a century ago, British inventor Alexander Stanhope St George supposedly devised plans for the an apparatus that would allow visual communication across the Atlantic via a series of subterranean tunnels. Sadly, St George’s device, the Telectroscope, never moved beyond the planning stages and his maps and drawings languished in the family archives for generations—or so the tale goes. Five years ago, St George’s great-grandson Paul discovered the blueprints and decided to bring the Telectroscope to life... the younger St George [has unveiled] his steampunk contraption at both Fulton Ferry Landing in Brooklyn and London’s South Bank. (Residents from the two cities will be able to mug at each other at all hours through giant monitors.)"

"So, you actually dug a tunnel from London to New York?"
"I didn’t build it—I connected existing tunnels. I was able to access lines in the middle of the Atlantic left over from when people laid the first telegraph cables—the “Victorian Internet.” I used mirrors to enlarge the images and bring them up from underground, like a periscope."

Those interested in exploring this story further can read about the original "telectroscope" in this Wikipedia entry, and the modern one in this BBC article (with video) and this TimeOut New York article (the latter contained the quotations above). Found at Nothing to Do With Arbroath (to whom credit for the lower two pictures).