Albino tadpoles - how cool is that?? 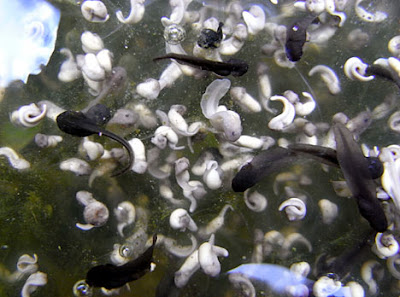 I have enjoyed raising tadpoles to frogs in a terrarium, so this story from today's DailyMail caught my eye.

Experts on amphibians have been caught on the hop by a rare batch of albino tadpoles living in a garden pond.

Tiny pale globules of frog spawn and tadpoles are now under observation at a secret and closely guarded address in Carmarthenshire, west Wales. Experts from Froglife were called in after at least four separate blobs of albino spawn were found deposited in the pond.

"Albino individuals of adult frogs, toads and newts have been reported in the past, though sightings are considered very rare," a spokesman said. "Cases of multiple albinistic individuals in a breeding population are even rarer."

"Usually albino amphibians fail to live to a breeding age - their white colour makes them a blindingly conspicuous beacon for the various animals that depend on frogs for food..."

"Caught on the hop." Obviously used here for its punning effect, but a new phrase to me - presumably with etymologic origins on the cricket field?? Perhaps one of my anglophile readers can clarify...