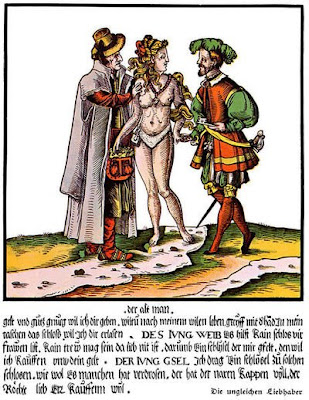 "As plausible as it might sound, the chastity belt is not however a medieval invention... There are, in fact, no genuine chastity belts dating from medieval times: all known 'medieval' chastity belts have been produced in the first half of the 19th Century. These fake-medieval chastity belts are too heavy and the workmanship is too crude, even for medieval standards. The oldest design for a chastity belt that can be taken seriously dates from the 16th Century - but it's just a design, with no real working models believed to have ever been constructed. The concept of a chastity belt itself is a lot older, but it was usually used in poems in a metaphorical sense..."

(Image from Wikipedia via Scribal Terror. Text from the BBC.)