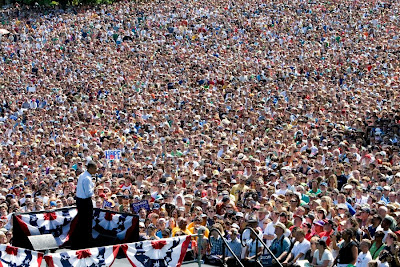 The photo was taken yesterday during a campaign stop by Barack Obama in Portland, Oregon. The chief of Portland Fire & Rescue estimated that 75,000 people were present for the speech. Click to enlarge (and more photos at the link to show this one isn't Photoshopped). When was the last time ANY presidential candidate in ANY election cycle drew a crowd this big? Perhaps when JFK gave his famous "I am a jelly doughnut" speech in Berlin.

75,000 people didn't turn out to see who the candidate is or what he looks like; they know that from television. They didn't come to hear the content of a speech which was almost certainly a repeat of content expressed many times previously. They were there to make a point - voting with their feet. It reminds me of the final scene from "V for Vendetta."

John McCain and the Republican party should be trembling in their boots at the prospect of facing this kind of enthusiasm for the Democratic nominee.


addendum: Here's the coverage from CNN: "Obama made low-key campaign stops this weekend, hitting a street festival in Keizer and stopping for ice cream in Eugene."