Bernoulli is probably rolling in his grave 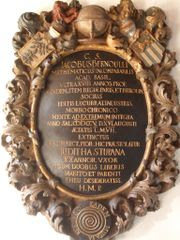 The logarithmic spiral was first studied by Descartes in 1638 and thereafter by Jakob Bernoulli. Bernoulli called it the "miraculous spiral" because of its mathematical properties and its propensity to appear in nature (the link shows a logarithmic spiral in a Nautilus shell, a hurricane, a spiral galaxy, and broccoli). He was so enchanted by the form that he left instructions for a logarithmic spiral to be engraved on the headstone of his tomb.

The stonemason, however, did not draw a logarithmic spiral - he drew an Archimedian spiral. (Credit to the new shelton wet/dry and mathworld.)