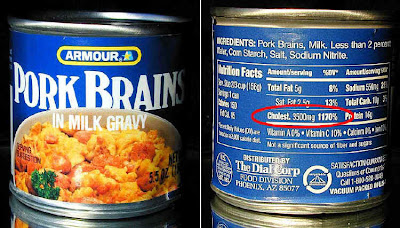 “An exhibition of historic Australian cookbooks has revealed the tastes of the country's pioneers, including recipes for bandicoot, kangaroo brains and black swans… A recipe in Australia's first known cookbook, dating from 1864, [is] for a dish called "slippery bob", consisting of kangaroo brains mixed with flour and water then fried in emu fat. The book's author Edward Abbott described the delicacy as bush fare, admitting it required "a good appetite and excellent digestion" to stomach.

"…extolling the virtues of "bush tucker" eaten by Aborigines, an area that modern Australian chefs have only recently begun to explore. "I am beholden to the blacks for nearly all my knowledge of the edible ground game," she writes, going on to praise the taste of witchetty grubs -- "there is nothing nasty or disgusting in these soft white morsels, any more so than an oyster."

For those not deterred by the prion-related concerns of eating concentrated neural tissue, I offer the image above (from another, unknown, source) showing the cholesterol content of mammalian brain tissue.