Has everyone gone completely crazy??? 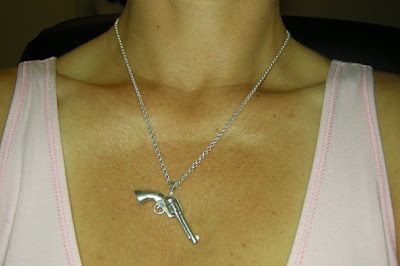 "On Monday, Marnina Norys, a Toronto resident... was put through the bureaucratic and culture-of-fear rigmarole while trying to board a place in Kelowna - all because she wore a necklace with a pendant in the shape of a gun (the classic Colt45, and the actual pendant depicted in the above photo)...

"How do you know it wasn't a real gun?" asked Guy, a security agent with the Canadian Air Transport Security Authority, who also declined to provide his last name.

"Who knows if there is a gun that small that can shoot bullets? You don't know that. They followed the rules."

This silliness serves as just one more reminder - we've lost our ability to embrace logic, and the terrorists have won."