How you can be fooled by a "heat map" 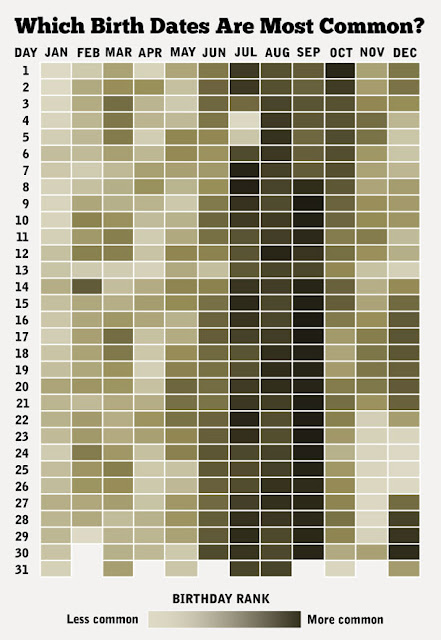 The image above shows "each day of the year with a ranking for how many babies were born in the United States on each date from 1973 to 1999."  Obviously, more people were born in Jul/Aug/Sep than in Jan/Feb/Mar.  But after the chart was published in The Daily Viz, the creator found it necessary to publish a clarification -


While I’m excited about the traffic, I’m also worried that the graphic may have misled some readers. Some people read the map assuming that darker shades represented higher numbers of actual births, even though I tried to explain in the post that the colors were shaded by birthday rank, from 1 to 366, in popularity. Or I thought I did. Because of that, Sept. 16 — the most popular birthday — seems wildly more common than January 1, among the least popular. Both may be relatively close in the raw number of births, even though their ranks are far apart.

Here's a followup graph showing births/month (and normalized for number of days in the month): 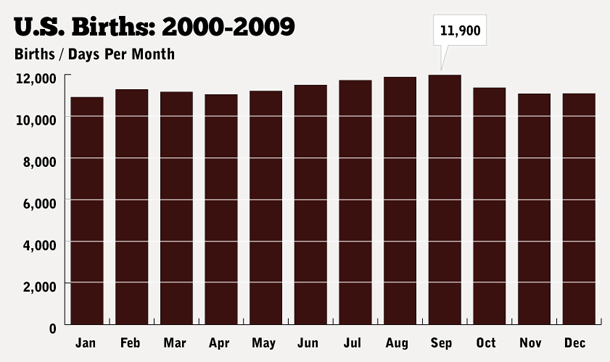 What I actually find most interesting about the first heat map is the extent to which modern medical technology allows birth days to be manipulated - the obvious gaps at the Fourth of July and the days closest to Christmas, with the darker shades just before and after those holidays.