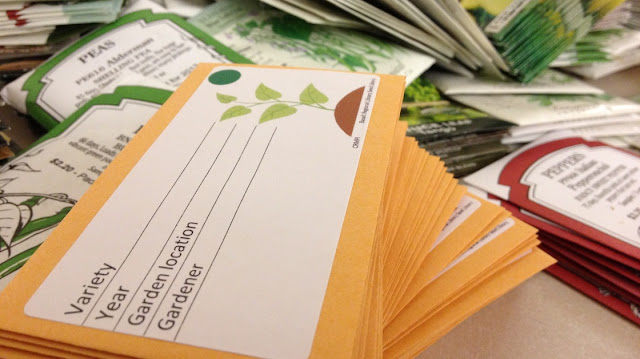 Seed-saving as a concept is as old as agriculture, and despite (or because of) the threat of genetically-modified crops, it continues to thrive.  Seed banks have been created as storehouses for preservation of traditional and heirloom varities, and seed libraries exist to encourage dissemination of the seeds.

In 2010 the New York Times described a seed library for heirloom plants in the Hudson River Valley.


Such groups are not common. There are only about a dozen seed-saving entities like Mr. Greene’s in the nation, said Bill McDorman, the president of one of them, Seeds Trust in Cornville, Ariz. These enterprises vary widely in age, size and formality, from the Seed Savers Exchange in Iowa, a multimillion-dollar group founded in 1975 by Mr. McDorman’s friend Kent Whealy, to the Richmond Grows Seed Lending Library, a grass-roots seed-swapping community in the San Francisco area that was begun just last May.

Members of the Hudson Valley Seed Library, who have grown from 60 at the start to nearly 700 now, pay a $20 annual fee for 10 seed packs of their choice. The library offers 130 heirloom plant varieties, 50 of which come from locally produced seeds...

In 2011 the Los Angeles Times reported on a similar venture in their city.

I was pleased to find an article at NPR this morning indicating that the concept has now been extended to incorporate some local public libraries.


"You have to be fleet of foot if you're going to stay relevant, and that's what the big problem is with a lot of libraries, is relevancy," she says.

Milnor says that while a library may seem like an odd location for a project like this, seeds and plants should be open to everyone. That makes a public library the perfect home for a seed collection. The American Library Association says there are at least a dozen similar programs throughout the country.

I'll try to forward this idea to the Library Board at our local library.