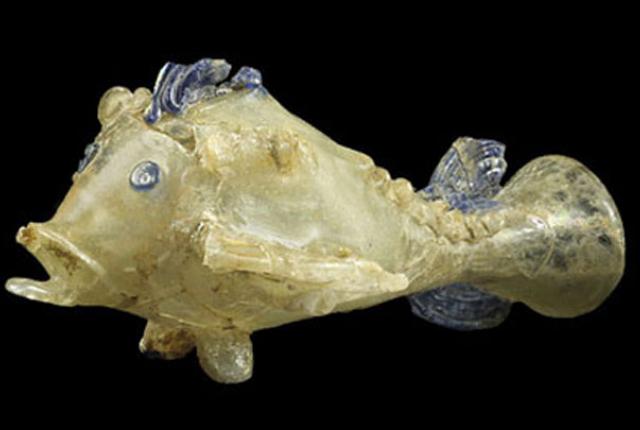 
The exhibition Afghanistan: Crossroads of the Ancient World contains nineteen of the roughly 180 glass vessels found in the ancient Kushan storerooms at Begram. Many have very close parallels from the Roman world which also support a date of about 100 AD for the sealing of the rooms. These include mosaic glass and ribbed bowls, facet-cut beakers, a drinking horn, a jug decorated with gold foil, another that appears almost black, and a stunning series decorated with scenes painted in brightly coloured vitreous enamels. All functioned as tablewares but, whereas some are very common, others were probably relatively expensive.

However, some of the vessels found at Begram remain something of a mystery and these include as many as twenty-two which are in the shape of fish and other creatures. Three of these are shown in the exhibition. They were made by inflating the glass while it was hot and adding trails of glass to the body, and sometimes in a different colour, to create very distinctive fins. The composition of the glass resembles that of Roman glass made in Egypt yet there are no known parallels, either complete or fragmentary, for these vessels from the Roman world.

You can read more details at The British Museum's blog, via Mental Floss.