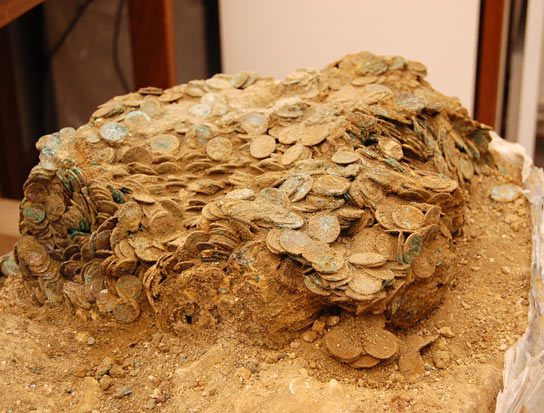 I've just discovered The British Museum blog, putting myself at risk of not getting any real work done for a month.


In November 2007, during a routine archaeological excavation in advance of building work in Beau Street, Bath (a stone’s throw from the famous Roman Baths themselves), archaeologists came upon what was clearly a very large number of coins contained within a cist (a stone-lined box). Upon further excavation, they quickly came to realise they were looking at one of the largest coin hoards found in the UK, representing quite a tumultuous time in Roman Britain – about AD 270.  In order to preserve its shape and context, the archaeologists cut around the hoard and lifted it in a soil block.

The initial report was posted in May of 2012.   Last week there was a followup, with some post-conservation photos and data.


We have been able to sort and count seven of the eight Roman money bags contained within the hoard – one is still undergoing conservation. The total so far is 14,646 coins, but as the final bag is large we expect this to go up to over 16,000 coins...