Is the word "midget" per se offensive ?

Excerpts from the story reported in the StarTribune:


Chelley Martinka, a Rhode Island mom... noticed that Cains, a popular pickle brand in New England made by Minnesota’s own M.A. Gedney Co., had an offering called “midgets.” It’s a term that’s offensive to people born with dwarfism, as well as their families. And Martinka’s daughter, now 10 months old, had been diagnosed with the condition soon after birth. 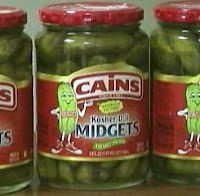 So, she blogged about the issue, made a YouTube video and contacted Gedney, the 132-year-old pickle maker with a national presence and a brand particularly well-known in the Twin Cities. Gedney’s CEO, Barry Spector, called her earlier this month and said the company would indeed junk the midget moniker...

Martinka’s daughter Adelaide, has achondroplasia, the most common form of dwarfism, which is caused by a genetic mutation. For those who have it, their preferred name is “little people.”..

Chaska-based Gedney has used the midget appellation in a version of its Del Monte brand of pickles, as well as in one item under the Gedney brand. But with its namesake brand — a big seller in local supermarkets — Gedney uses “Babies” and “Mini-Munchers” to describe most of its small pickles...

The United States Department of Agriculture defined the standards for grades and sizes of pickles in the United States. According to the USDA, a ‘midget’ pickle was the word designation for a pickle with a diameter of 19 mm or less.”

My dictionary shows midget as having been derived from midge (a tiny insect), in common use since the early 19th century.  From Wikipedia:


The term "midget" came into prominence in the mid-19th century after Harriet Beecher Stowe used it in her novels Sunny Memories of Foreign Lands and Old Town Folks where she described children and an extremely short man, respectively. P. T. Barnum indirectly helped popularize the term "midget" when he began featuring General Tom Thumb in his circus. "Midget" became linked to referencing short people put on public display for curiosity and sport.

I fully understand that the term is now considered perjorative when applied to people, but I'm surprised it would be offensive when used to refer to other items.

Photo cropped from the original at the Daily News.