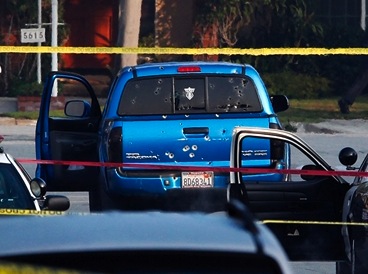 
Police were on the lookout for Christopher Jordan Dorner, a disgruntled ex-cop suspected of hunting down members of the LAPD and their families in a twisted campaign of revenge. The radio call indicated that the truck matched the description of Dorner's gray Nissan Titan.

A few minutes later, a truck slowly rolled down the quiet residential street.

As the vehicle approached the house, officers opened fire, unloading a barrage of bullets into the back of the truck. When the shooting stopped, they quickly realized their mistake. The truck was not a Nissan Titan, but a Toyota Tacoma. The color wasn't gray, but aqua blue. And it wasn't Dorner inside the truck, but a woman and her mother delivering copies of the Los Angeles Times...

Beck and others stressed that the investigation into the shooting is in its infancy. They declined to say how many officers were involved, what kind of weapons they used, how many bullets were fired and, perhaps most important, what kind of verbal warnings — if any — were given to the women before the shooting began...

Law enforcement sources told The Times that at least seven officers opened fire. On Friday, the street was pockmarked with bullet holes in cars, trees, garage doors and roofs. Residents said they wanted to know what happened.

"How do you mistake two Hispanic women, one who is 71, for a large black male?" said Richard Goo, 62, who counted five bullet holes in the entryway to his house.

Then, after this incident occurred...


A few blocks from the first accidental shooting, police were responding to the shots fired calls and came across another similar pickup truck to the suspect's. There was a collision to the rear of the vehicle and police fired three shots (at least) into the windshield of the driver who was luckily uninjured and NOT INVOLVED.

Christopher Dorner, the intended target of the police, worked for LAPD and has accused them (manifesto here) of abuse of power and incompetence.

The ultimate irony, as several other sources have commented, is that their response to him is validating his allegations.

Photo cropped from the original by Reuters / Patrick T. Fallon.