Word for the day: drey 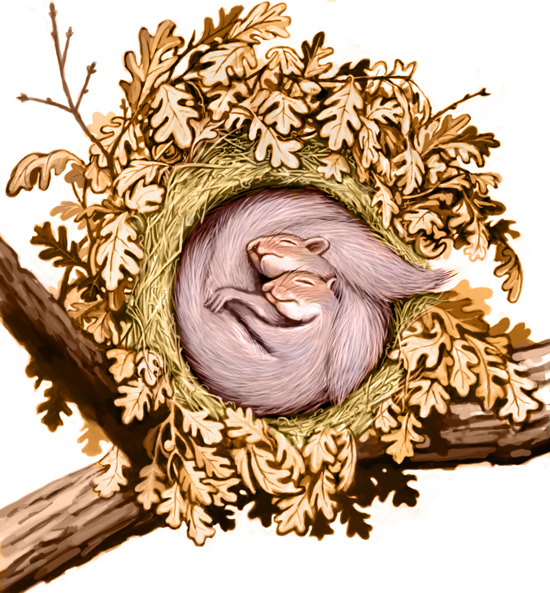 Yesterday I was alerted to the existence of the "Urban Jungle Archive" at the Washington Post - an ongoing collection of brief, illustrated entries on natural phenomenon that can be observed in a backyard or park.  It's nicely done, and I've harvested two items this morning.

I've often wondered why squirrel nests don't disintegrate during the winter.  We see them near treetops rocking in the wind and covered with snow, but many or most of them survive until the spring.


Built in the summer or early fall, the drey begins as a collection of small, gnawed-off branches bearing green leaves. Even though they are brown in the winter, the leaves surrounding the drey continue to cling tightly to their branches because they were harvested well before the tree began the process of shutting down and shedding its leaves.

More details at the Washington Post article (whence the image).   On a slightly related matter, I've written a blog entry about marcescence before, without providing a logical explanation about why it might occur.  A separate Urban Jungle Archive article offers this postulate:


Marcescence, the persistence of withered tissue on a plant, occurs mostly on younger trees and on the juvenile parts (lower branches) of older trees... Why would a tree evolve with this trait? Scientists think it may deter deer from feeding on a tree's nutritious twigs and buds. Dessicated leaves tend to be low in nutrients and difficult to digest, so their presence might cause a hungry deer to look elsewhere for food.

And now back to "drey."  During about 60 years of reading nature stories, I've never encountered this word for "nest."  And it wasn't in my Random House Dictionary.  Had to resort to the OED which called it an obsolete form of "dray" = "squirrel's nest" with an "origin unknown."  I'm guessing that because "drey" is also a variant  spelling of "dry" that the two are related.

In the process I found this at Wikipedia: