The enormous size of a "battle flag" 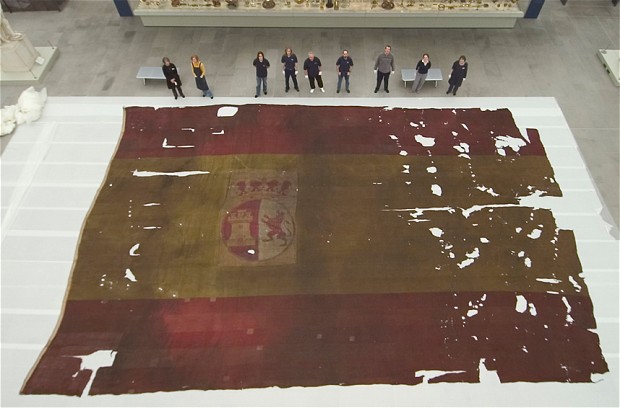 My curiosity was piqued by the image above, from a Telegraph article yesterday:

Flag from the Battle of Trafalgar, The National Maritime Museum, Greenwich

This flag has flown at two hugely significant moments in history – from the back of a Spanish warship, San Ildefonso, as it fought against the British fleet led by Nelson at the Battle of Trafalgar, and from the roof of St Paul’s Cathedral during Nelson’s funeral service on January 9 1806.

After Nelson’s funeral, it stayed in St Paul’s for a century. Now, it belongs to the National Maritime Museum in Greenwich. They keep it in storage, because it’s very fragile and they don’t have the space to hang it. The biggest flag in the museum’s collection – it is 33ft long and 48ft high – it is folded up, wrapped in tissue paper and stored in a long cardboard box on the bottom shelf of a cabinet.

The trophy flag is made of wool and feels very coarse. It has the arms of Castile and León in the middle and the name of the ship on the hoist in ink: san ildefonso. It has holes from where it was shot, and it is frayed on the edges from when it flapped in the winds. Much later, perhaps when the flag was hanging in St Paul’s, souvenir hunters armed with a knife or pair of scissors cut out the larger holes on the left-hand side.

I hope Dante's Inferno has a special basement level for "souvenir hunters."


According to the Diccionario Enciclopédico Ilustrado de la Lengua Española Sopena, Barcelona, 1954, a bandera de combate or 'combat flag' is "a national flag, very large sized, which is hoisted over the stern of warships when they go into battle or in very solemn events". Is this the practice of Spanish ships? Depictions of sea battles of the 15th to 19th centuries usually show that most warships of different nationalities have large flags and pennants, not only Spanish ships but also Dutch, Portuguese and British. However, it might be that the Spanish Navy's flags were unusually larger than the rest. A book I have on piracy and the Spanish Armada (Heretics in Paradise: English corsairs and sailors on the Venezuelan shores during the second half of the 16th Century, Colección Quinto Centenario del Encuentro de Dos Mundos, Editorial Arte, Caracas, 1994) has several illustrations of sea battles and particular ships. Even though all ships bear many different flags of large size and bright colours, it is certainly the Spanish fleet which boasts the largest 'combat flags'. We should remember that ensigns and war pennants had an enormous strategic importance in naval warfare. 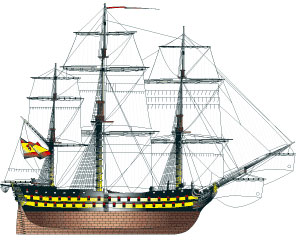 
In nautical use, the ensign is flown at the stern of a ship or boat to indicate its nationality.  Ensigns are usually flown from the stern staff of a ship, and may be shifted to a gaff (provided the ship is so equipped) when the ship is under way, where the ensign is known as a steaming ensign. Vexillologists distinguish three varieties of a national flag when used as an ensign...

More at Wikipedia.  Image of the San Ildefonso from 3decks.