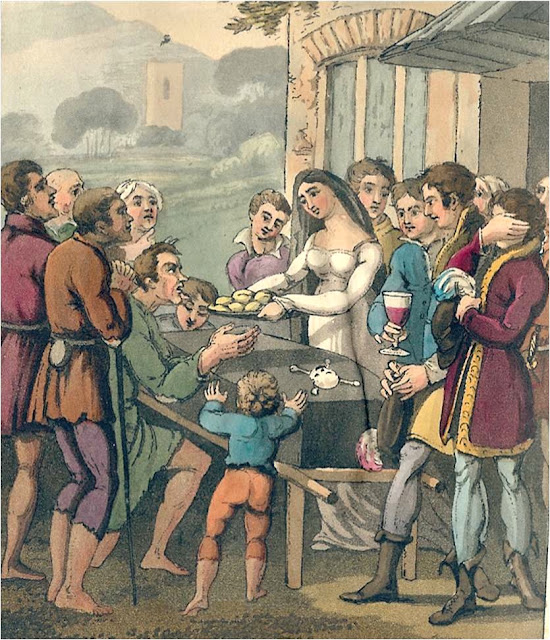 As described in Wikipedia:


The term sin-eater refers to a person who, through ritual means, would take on by means of food and drink the sins of a household, often because of a recent death, thus absolving the soul and allowing that person to rest in peace. In the study of folklore sin-eating is considered a form of religious magic.

This ritual is said to have been practised in parts of England and Scotland, and allegedly survived until the late 19th or early 20th century in Wales ... as well as certain portions of Appalachia in America (documented in the Foxfire cultural history series).

Traditionally, it was performed by a beggar, and certain villages maintained their own sin-eaters. They would be brought to the dying person's bedside, where a relative would place a crust of bread on the breast of the dying and pass a bowl of ale to him over the corpse. After praying or reciting the ritual, he would then drink and remove the bread from the breast and eat it, the act of which would remove the sin from the dying person and take it into himself...

The 1911 Encyclopaedia Britannica states in its article on "sin eaters":

"A symbolic survival of it (sin eating) was witnessed as recently as 1893 at Market Drayton, Shropshire. After a preliminary service had been held over the coffin in the house, a woman poured out a glass of wine for each bearer and handed it to him across the coffin with a 'funeral biscuit.' In Upper Bavaria sin-eating still survives: a corpse cake is placed on the breast of the dead and then eaten by the nearest relative, while in the Balkan peninsula a small bread image of the deceased is made and eaten by the survivors of the family. The Dutch doed-koecks or 'dead-cakes', marked with the initials of the deceased, introduced into America in the 17th century, were long given to the attendants at funerals in old New York. The 'burial-cakes' which are still made in parts of rural England, for example Lincolnshire and Cumberland, are almost certainly a relic of sin-eating".

I wonder if any of this custom morphed into the present-day custom of sharing food after a funeral (cf The Big Chill).

Image via The Oddment Emporium.